I think I've submitted 3 rare jaegers (2 poms and a longtail) to the MBRC over the last few years and have gone 0 for 3 with either no or very distant pics.  So when I eBirded 2 Parasitics from New Buffalo a few days ago I had to smile when Adam asked me why I'd eliminated Pomarine for one of the birds.

The first bird was a first year that I didn't get great photos of.  It was very windy and the bird looked fairly heavy with its primaries held fairly tightly for the most part and wasn't particularly warm in color.  I actually thought this bird had a very good chance of being a Pomarine.  Eventually it came close enough for the camera to pick up some projecting tail points 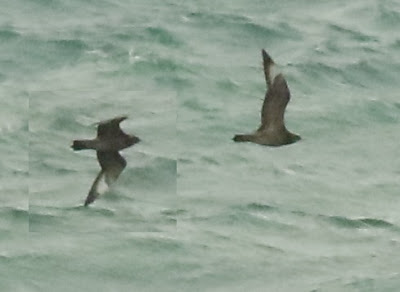 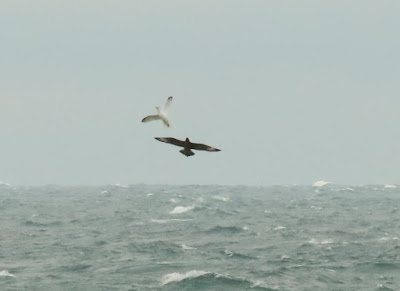 Not too much later Andrew picked up another jaeger, this one an adult.  It cut tantalizingly across the harbor and I abandoned the scope for the camera. 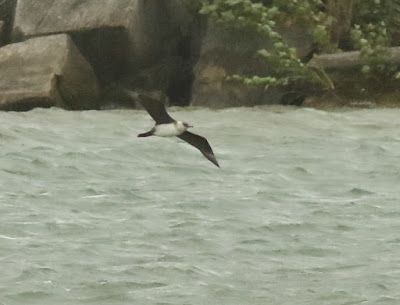 I didn't think the dark in the face came down very far and it certainly doesn't have much of a breast band so I chalked it up as a Parasitic without thinking too much about it (more irony after I tried really hard to turn the Parasitic into a Pomarine).  If I'd stayed with it a little longer in the scope I might have noticed the two tone bill.  Oh well.  A not so solid pic of the pale-ish bill base. 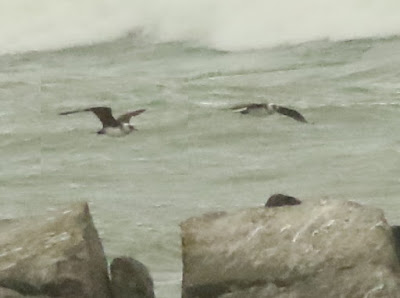 The bird kept coming north.  Crops through the camera show a pretty long bill with the suggestion of a thicker gony angle. 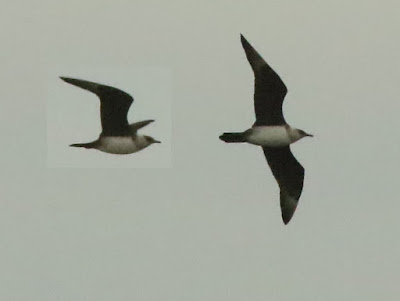 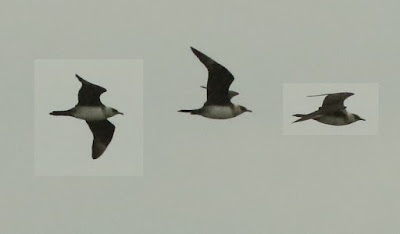 As it quarters away another angle at the broad tail projection... 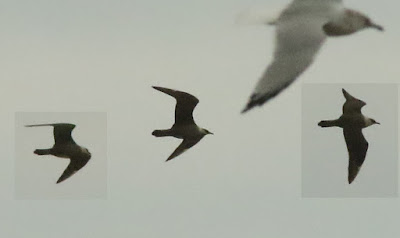 I've never found counting pale primary shafts to be that useful, but if you're so inclined the left image may help.  You do get a sense of the face mask coming lower on the face from this angle than the initial view in the harbor. 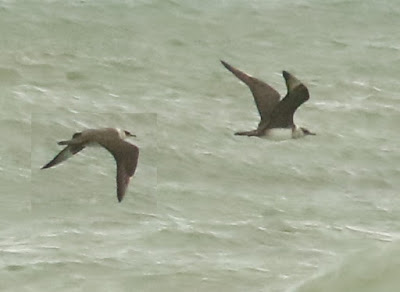 Another view of the mask, as well as breast-heavy gestault. 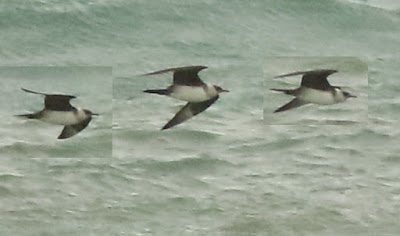 The bird accelerated up to attack a Ring-billed exposing the spread tail as it flared after its target. 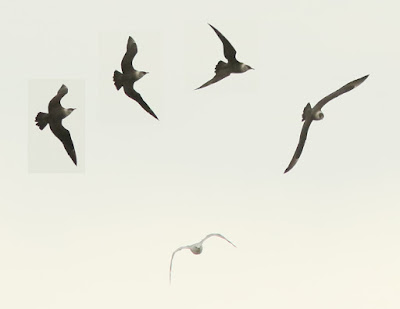 I count 10 tail feathers though it's possible some of the outer tail feathers are folded over each other.  There should be 12.  Given that the bird has projecting central rects with the tail folded I think we can trust that the central feathers are included here (and given the gap in the tail on the leftmost image I wonder if it's the bilateral 2nd tail feathers that are missing).  It'd be nice if the RBGU was in the same posture as the jaeger to compare the wingspan better.

One last view of the mask extending onto the malar. 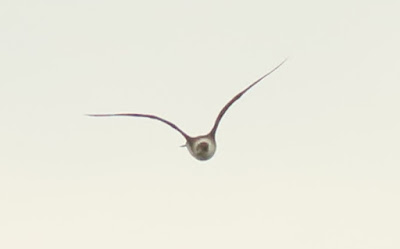 I've been having bigtime computer problems for a week and am using an old one without photoshop.  It will be interesting to see if the two-tone bill comes out more when I can lighten some of the broadside views.
﻿
﻿
Posted by Matt at 8:23 PM