He's Back.  For the severalth consecutive year.  This bird usually appears in September in the north and central part of the county before working its way slowly south and hanging out some in New Buffalo and then mostly northern Indiana by the time winter rolls around.  This bird is frequently claimed as a Chandeleur Gull (a Kelp x Herring population that survived for a decade or so in the Gulf of Mexico on some little islands that were wiped out in a hurricane).  The Louisiana ornithologists who studied the Chandeleur Island birds say it isn't one.

I emailed Al Jaramillo last year about it who thought Great Black-backed x Lesser Black-backed would be more consistent with its appearance, with the obvious caveat that likely it's impossible to prove.

The bird was up close in New Buffalo and that explanation makes a lot of sense. 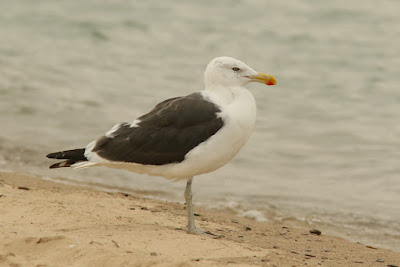 The bird has a mantle shade that would seem appropriate for GBBGxLBBG (and darker than the majority of Chandeleur gulls which had the full gamut of mantle color between Kelp black and Herring gray).  The legs are very long.  This bird is always taller than Herring Gulls.  I've never thought the grayish-bland leg coloring (with pink webs) was that inappropriate for crossing a pink-legged bird with a yellow-legged bird.

A close-up of the head.  It has the heavy gony angle of GBBG and the brilliant orange spot of LBBG.  The gape of both Herring and Kelp is yellow, this bird's is definitely not yellow.  GBBG and LBBG have red and red-orange gapes respectively per Sibley. 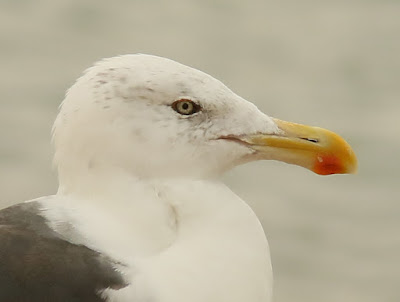 The head streaking could probably be explained by either combination.

Another shot of the spreadwing. 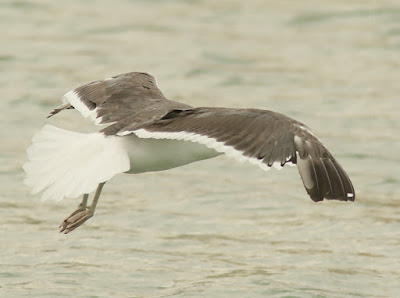 I've gone feather-by-feather down the spreadwing in the past.  Here's the link to the Louisiana paper describing the Chandeleur birds, there's a good description of the spreadwings of their birds inside.
Posted by Matt at 12:11 PM