It was solitary but not alone

Tim and I were birding Floral when I had a Blue-headed type vireo appear in front of me.  I watched it as it seemed paler than I'd ever seen Blue-headed appear.  We walked 10 feet further down the trail to clear some obstructions and started taking pics.  I haven't found the articles that talk about Blue-headed vs Cassin's and have never seen a Cassin's so for now I'm just going to put the pics up mostly. 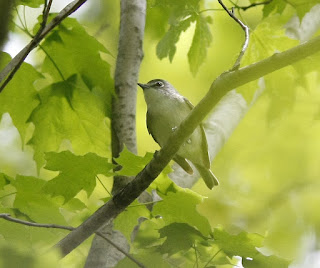 The cap is much paler than any Blue-headed I've ever seen and is not as crisply defined along the malar as Blue-headed.  The lore is noticeably darker than the rest of the cap.﻿ 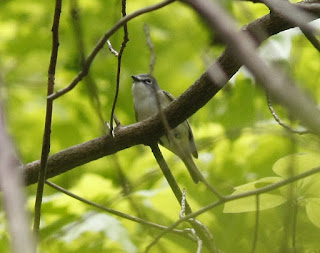 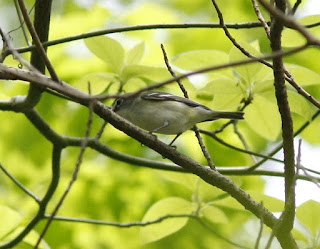 The bird then came out into the sun and the slightly olive tinged gray back really jumped out, it's not at all like the green back of a normal Blue-headed. 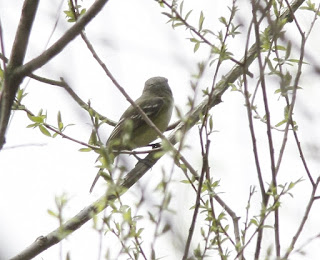 The back color extends up over the back of the head which apparently is cited as a pro-Cassin's feature in an article I can't find. 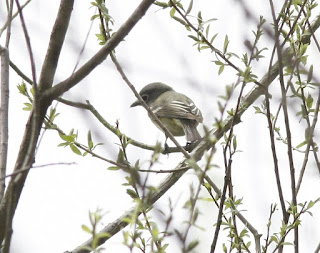 The bird popped up twice more for us, usually pretty high in amongst the warblers. 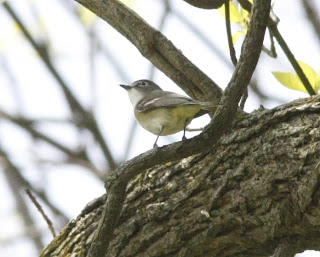 Unfortunately Blue-headed isn't a species that I've had a ton of luck photographing in the past so I don't have a lot of comparison shots.  Hopefully I can find some of the articles that talk about separating the two.  I was kind of surprised to see that Cassin's Vireo is widespread in the West east of the Rockies; I had always considered it a Pacific coast bird.  They do winter in Texas so it's surprising there aren't more seen in the East though findability and confirmability issues probably play a role in this.

I haven't edited the pics at all except for cropping them.

I had a very similar-looking bird in Toronto yesterday. Unfortunately, I don't carry a camera when I go birding and therefore didn't get any pics.

The article you're looking for is here:
http://www.californiabirds.org/members/Solitary%20Vireo%20complex.pdf

FWIW, your bird looks pretty good for Cassin's to me, although I'm not very experienced with them. I'd be interested to hear what others with more experience with Cassin's think.

My bird showed the same pro-Cassin's features as yours (weak contrast in malar area, pale head, little contrast between head and back, little colouring on sides).

Good luck with this bird!