I don't have many rules for birding. In fact I think I only have one. It's fairly simple. Dont. Chase. Gulls. They move around widely. They hunker down for hours on end. They're just not a high-yield chase, if there's such a thing at all. Unless someone calls and says they're looking at the bird, don't do it.

Slaty-backed Gull is pretty high on my want list and one has been showing up off and on in the extreme western Indiana lakefront. It was re-seen yesterday and since I finally had a day off that actually didn't still have work obligations I decided to once again put the rule to the test. 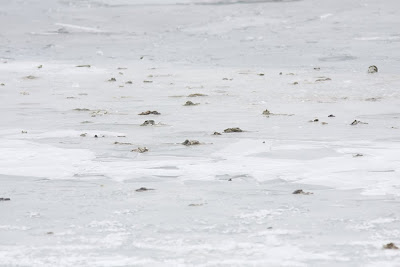 Yes those are semi-frozen goose turds. An Indiana birder said he'd actually seen it about 10 minutes before I arrived and about 200 yards out, harkening memories of finally being able to chase the Ivory gull in Leamington Ontario a few years and crossing paths with the last birder to see the bird coming off the beach as I walked out. An eagle had put all the birds up and he'd lost the Slaty-back when a bunch of geese flushed in front of him. I'd seen the geese fly from about a quarter mile away on the walk out.

The gulls were resting on the ice about 500-1000 yards away, mostly hunkered down with their heads in their scapulars. Occasionally one would pop its head up. There were about 10 dark-mantled gulls, all that were ID-able were Great Black-backed.

The bird arrowed on the left was a clear GBBG. The arrowed bird on the right had a mantle a shade subtly lighter, was a size smaller and seemed to have more white of the tertial skirt and more prominent white spots to the primary tips. There's a good chance it was the bird. It rarely popped its head up and never stretched its wings. It once suddenly flew without warning along with all the birds around it and was hard to pick out after a wingbeat or two as it wasn't all that dark underneath, which would be consistent with what Sibley points out about Slaty-backed. It had pink legs so it wasn't a Lesser, but still conceivably could have been a small GBBG. At the distance it was impossible to really see the face pattern though I note in photos of this bird it has less of the black around the eye that some have. I had hoped that the predicted snow would coincide with a wind shift that might push the birds in. No such luck, I left when the snow cut visability in half.
The only salvagable moment was when this Kumlien's gull flew by. With my naked eye I thought it was Thayers with the dark eye and decent amount of dark in the wing, but the camera reveals gray not blackish coloration in the primaries with the dark stopping at p6, what Howell and Dunn show to be close to the maximal allowable colaration for a Kumlien's. 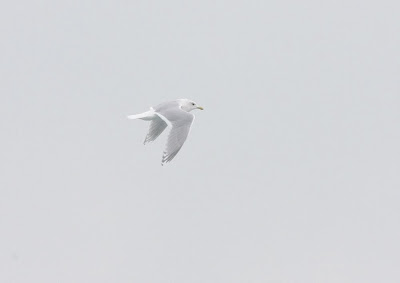 Those who think Kumlien's is a hybrid swarm will point out that it's interesting that the bird with the upper limit of pigmentation on the wings would have a Thayer's like dark eye. I forget what the literature says about whether the 10% or so Kumlien's Icelands that have dark eyes also tend towards more coloration in the primaries or not. 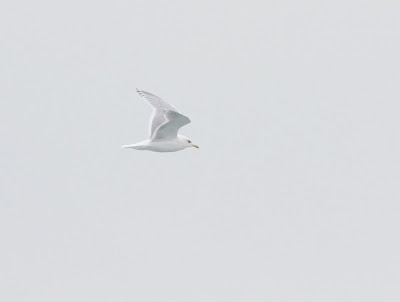