Since the day I took my first shots with the camera at the end of the pier I've been looking forward to getting flight shots of an adult Thayer's. Tim had seen a Thayer's in the last day or so at Tiscornia and he again picked it up at rest on the South Pier. We walked out the North Pier to try to get some shots. Aided by a loaf of bread, the gulls obliged. 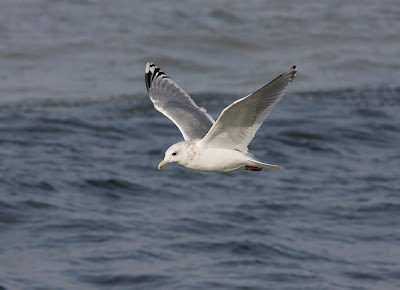 About 20% of Kumlien's Iceland Gulls will have a dark eye, but they shouldn't have as nearly black of wingtips as this bird has. There's a very tiny black mark on P5 which most Thayer's will have (though 20% lack) which Kumlien's generally lacks. From what I can tell in Howell and Dunn and Olsen and Larssen many Thayer's will show just very slightly more black along the leading edge of P9 that connects the black of the tip with the black of the remainder of the feather which this bird just just barely does. I can't tell if P10 is older than the other feathers or if it's maybe just a little more faded since it's the most exposed with the bird at rest. 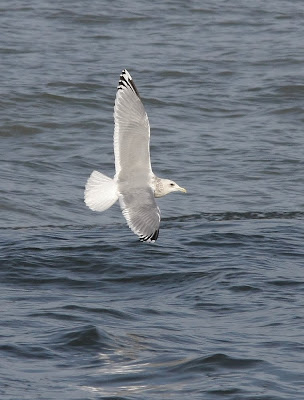 Just as the bird made its closest approach it checked up and stalled, probably considering a piece of bread. I would have totally over-exposed it if it kept going into the light though anyway. 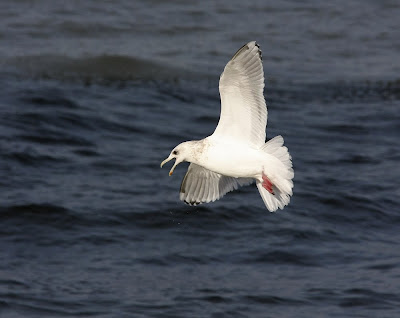 A female Long-tailed Duck would forage pretty close to the pier at times. 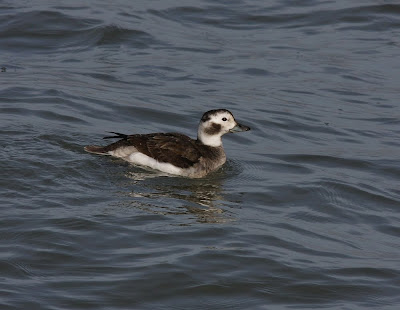 This was the first Surf Scoter I've seen in at least a month if my memory serves, maybe longer. It's certainly the first adult male in a while. I've seen a few adult male White-winged lately, but the Blacks have all been female or first winter male types. 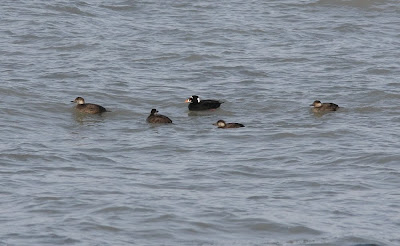 And for the year list, the Western Grebe made another pass by the pier while we were up on the dune, but headed severaly hundred yards out subsequently.

Excellent. I love the cluster of scoters.