The St Joseph Rivermouth is nearly frozen over; about a dozen goldeneye kept a small hole open, but if it doesn't warm up, the entire area will soon be a brick of ice. Lacking a better idea I drove south to see if the reported Trumpeter Swan in Niles was around. I found 4 Mutes instead of 3 Mutes and a Trumpeter. I tried walking up river away from the congregation of waterfowl and after a bit 2 young Bald Eagles flew down river in reasonable light. The good thing about eagles is that they don't have to be that close to still be full-frame. I chose the far bird to photograph. 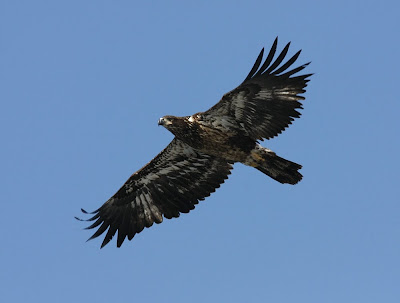 I walked back down river which was had more passerines than I had expected, likely finding the air temperature next to the 32 degree still open water a little better than the 5 degrees that the car thermostat was recording. This cardinal was probably my best image of that species. 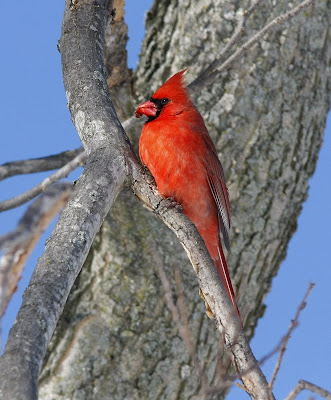 Some blue jays started alarming for some reason and a decent number of birds flew in and up out of some still berried trees, including this flicker. 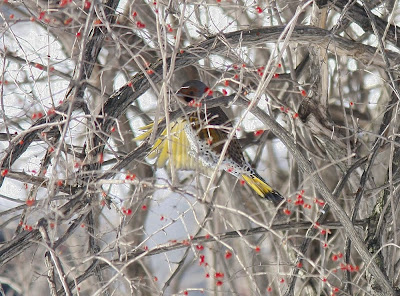 I was surpised to see a sapsucker, an uncommon winter resident. The photo is pretty distant and over-cropped, so stealing a page from Jerry Jourdan's book, I touched it with the watercolor tool on the editing program... 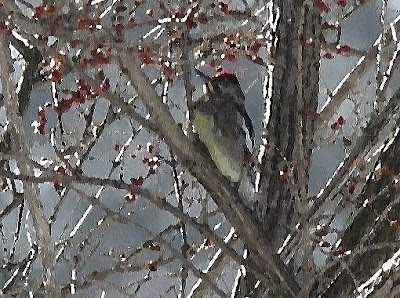 Your Sapsucker photo touch-up looks very cool, Matt. Since I have a lot of not very great photos - I should learn this technique!