My alarm went off at 9am. I hit the snooze bar. The phone rang 5 minutes later. My (mostly asleep) brain couldn't figure out why the alarm was going off so soon, since it goes off every 9 minutes. My wife handed me the phone, said it was Tim, and I heard, "I think I've got a Royal Tern at Jean Kloch." A shave and shower were completed in record time, my wife threw together a sandwich and a couple apples for lunch, and I arrived at Kloch a little past 9:30, shot about 125 photos in 12 minutes, and I arrived 5 minutes early for the 10am start of my shift at work.

The photo quality isn't great since they're really heavily cropped. Digi-scoping would probably have been more effective, but I didn't have time.

Note the orangey bill, somewhat narrower than a Caspian's would be, with the gony angle only halfway out the length of the bill. It's starting to lose the black forehead in the typical Royal distribution, and has much more wispiness at the back of the black than any Caspian. The tail is hard to pick up, I put a black mark on the first 2 photos lining up with the end to point it out; it's far longer than a Caspian's. 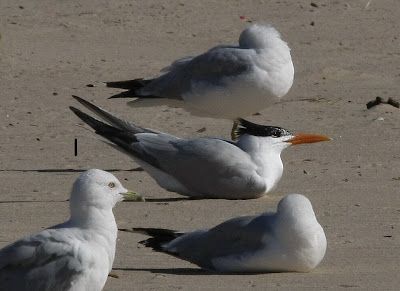 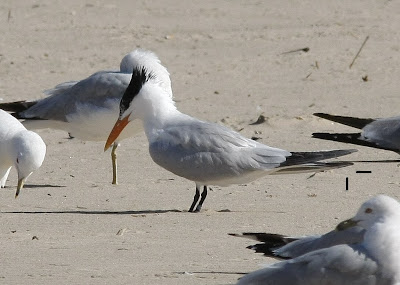 This bird actually has a silver band on the right leg; its origins may be traceable.
Here's a size comparison with the Ring-billed's, it looks much leaner than they are; Caspian generally appears considerably heavier (and indeed as I look up Sibley, he shows weights of 1.0 pounds for ROTE, 1.1 pounds for RBGU, and 1.5 pounds for CATE). This (quite cropped) pic is the last I had time to shoot of the bird. 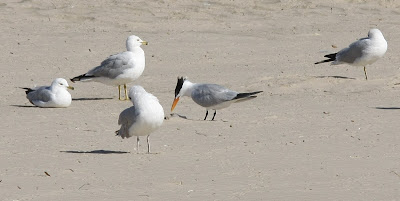 For a comparison of the bill shape and gony angle position, here's a Royal from Florida (I think from Volusia county with Don and Roger) 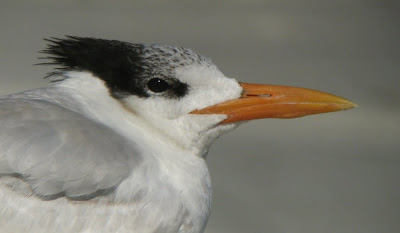 Here's a comparison Caspian from Tiscornia from late summer. Note the thicker (redder) bill with a gony angle much farther out on the bill and the much shorter tail. Interesting on this bird is a somewhat atypical (Royal-like) pattern of moult on the forehead. 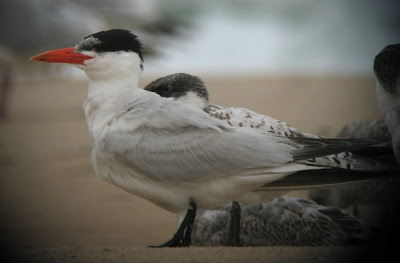 The bird, which I believe is a first state record pending acceptance, is the 299th bird for my Berrien lifelist. It returns to the more usual method of seeing rare birds in the county, go see what Tim sees (my other county lifers this year were unusual in that I saw them first).
It was surprising to see a bird of the gulf coast (though I suppose an Atlantic origin is possible) here without a hurricane (the oil spill would be a very different, unnatural, disaster). We'll see if the band can be traced. A quickest of google searches reveals that Royals have been banded in Maryland, Virginia, South Carolina, California, and northwestern Mexico, so perhaps a single silver band is not going to narrow it down very far.
Posted by Matt at 6:49 PM

When I'm in Maryland we look for Royal Terns at Hooper's Island, Dorchester County on the eastern shore. I'm sure they are elsewhere, especially in or near Ocean City. I don't think there are any banding projects going on in these locations, however. Thanks for the great post and good photos. Congratulations on 299!