A day at the museum

I suppose if there's a month where I really rack up the hours at work it may as well be June. It hasn't helped me get out very much though.

Tim's been sorting specimens at the AU museum and I stopped in for a couple hours today to look at some of the skins. They had one each of the four longspurs, all essentially breeding males. 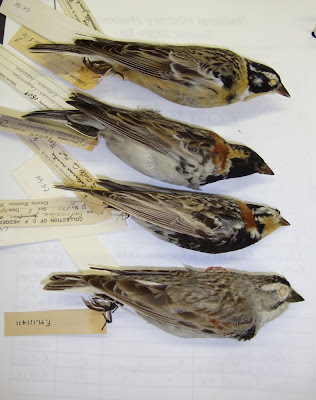 You can see the difference in primary projection for the long distance migrant Smith's and Lapland as opposed to the two prairie birds. The Chestnut-collared is faced somewhat away from the camera, but the smaller bill was apparent.

Here's the two waterthrushes, Northern on the top and Louisiana on the bottom. 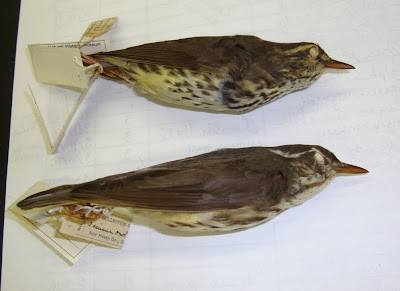 Note the supercilium and bill differences.
This next shot shows a point I wasn't aware of until Tim pointed it out this spring: 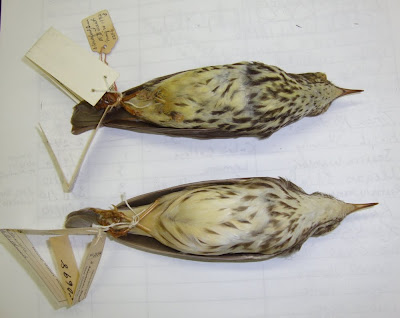 Northern has some speckling on the throat while Louisiana has a much cleaner throat. The speckling on a Northern's throat is hard to see in the field though, the presence of the marks is more reliable than the absence of visible marks on most views.

The last shot shows the flanks: 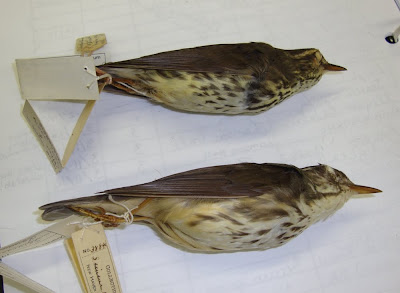 Louisiana frequently has a warmer more salmony color to the flanks.
I've got photos enough for a couple more ID themed blogs, so hopefully this site will be more active than it's been of late...