"From this point forth, we shall be leaving the firm foundation of fact and journeying ... into the murky marshes of memory into thickets of wildest guesswork." Bonus points if you recognize the quote. (Mostly) silent empids are the subject of this blog, all from this spring at Tiscornia.

It's hard to really capture the subtle colors present, so I've put a bunch of smaller pics together to try to give a better overall impression of the birds.

The first would appear to a be a Least Flycatcher. This bird was completely silent which puts on decidedly shaky ground traditionally. 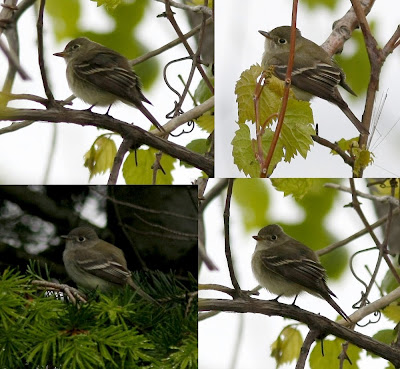 However, the bird has a very prominent eye ring, and a short bill, both good marks for Least. There is a decent amount of dark along the lower mandible; most of the eastern empids have mainly orangish lower mandibles. The bird does have a somewhat olivey back which contrasts somewhat with the color of the nape and head, another good mark for Least. It would have been nice to have heard the chip note, a soft whit call, but with the above marks, as well as the date of May 12, during the peak movement for Least and before most of the other empids have returned, is also supportive.

Next we have a longer billed bird with a much plainer less-contrasting eye ring, and much less in the way of olive tones. 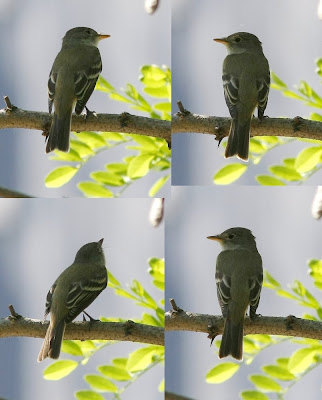 This bird would certainly appear to be in the Trail's class, either a Willow or an Alder. Willow is much more widespread in Berrien, and this bird's soft whit (quite similar to Least's) call also supports that ID. Alder apparently gives a stronger pip call said to be more reminiscent of a Carolina Wren. Next time I'm close to an Alder I'll try to hear that call note.

Finally we have the Yellow-bellied from last week. 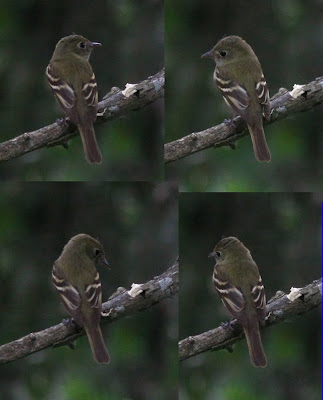 This bird (above montage and below) is intermediate between Least and the Trail's in terms of the strength of the eyering. It's evenly greenish above, with the back the same color as the crown and the nape. There's little contrast between the face and the throat. 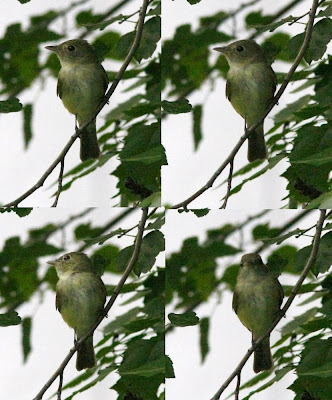 I had to really over-expose the pic since it was pretty dark that day and some of the yellowish underparts are lost somewhat in the pics. It did, however, give its diagnostic call, a very un-empid-like weak note that the books rightly describe as almost pewee-like.