Some rares are more exciting than others...

Tim and I did a warm-up route of sorts through the county today. Winds were strong out of the south all day, strong enough to keep the insects (and most insect-eating birds) hunkered down, but we did come across two surprises.

The first was this Trumpeter Swan at the 3 Oaks ponds. This was the potential county lifer I unsuccessfully and only half-heartedly chased last winter, figuring I'd run into one eventually. I was hoping this wouldn't be a semi-tainted 300th Berrien bird. Instead it comes it at 297. It was giving some honking call notes that I hadn't heard since my Washtenaw days. 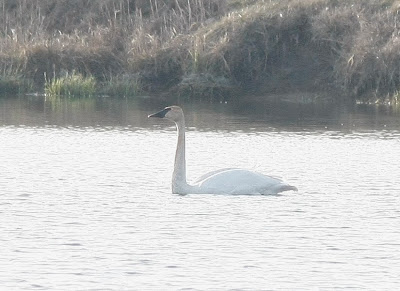 As we were driving through Three Oaks, rolling up the windows and trying to remember which dove cadence was White-winged and which was Collared (for the record, White-winged is the Barred owl knock-off and the Collared is ca-COOO-coo) a chunky square-tailed dove flew across the road, flew parallel to the truck, and landed in a roadside snag. We turned down an alley (in front of a cop who promptly pulled a U-y to investigate our strange behaviour) and found the bird in the preferred portrait position for Collared doves, arse-on. 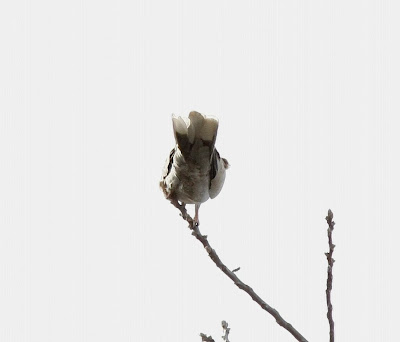 Note how the outer web of the outer-most rectrix (tail feather) is black half way out the length of the feather. In Ringed Turtle Dove this is white the entire length of the feather. Note that in this photo, the left-side tail feathers are overlapping such that the outermost feather is hidden. The gray undertail coverts are also consistent with Eurasian Collared-Dove (for more in-depth detail see the December 2001 Birding article pp 558-559). Hybrids do occur and are generally said to be somewhat intermediate between the two. Other Michigan photos of collared doves are on the MBRC page. A summary of how these birds came to be in America can be reviewed here.
[An early NAB article about collared doves and their ID is also reviewable from SORA here. - added 4/9/10]
I won't rehash Trumpeter Swan in the Midwest arguments, but suffice it to say we found 2 birds quite rare in the county (I hadn't encountered either in the nearly 4 years I've been living here though I did see the doves the last time they were in Berrien), but both with fairly checkered histories. Bottom line, I'd trade them both for a White Pelican.
Since both piccies are somewhat sub-par, here's a Red-breasted Nuthatch from Tiscornia yesterday... 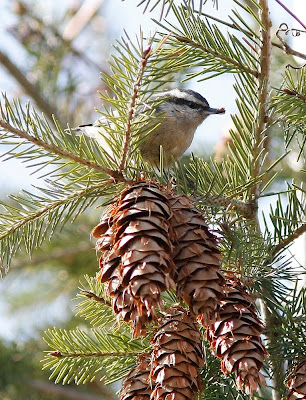