Horned Grebes don't draw the eye's attention all that often; they're common to see along the pier in migration, very familiar to the fisherman. Given their frequent close approach to the pier I was hoping to be able to target them somewhat on my first sunny morning yesterday.

Two did come in fairly close. Shooting in sunlight can be trickier than overcast since getting the exposure just right can be tricky. I had to do a fair amount of brightening on this image in the shadow of the pier... 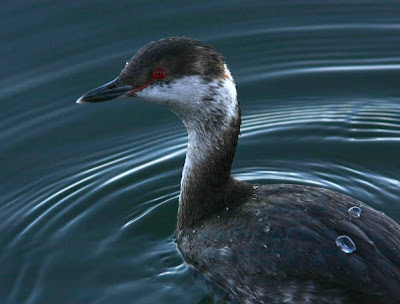 The full sun presents the opposite problem, with whites being over-exposed, though the red eyes just pop in the low morning sun 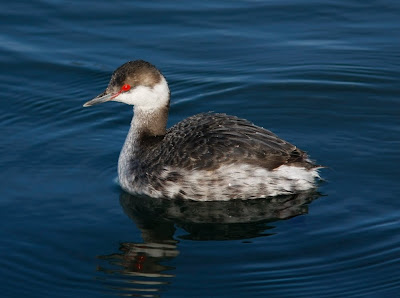 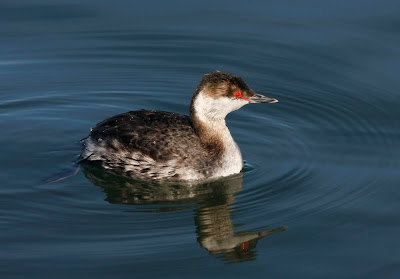 Note the subtle difference in the two birds' head shape and bill size. I don't know that any of the general guides comment on this, but Pyle shows this difference between males and females. The first sunlit bird is a female with a slighter bill and more rounded head than the last bird which has a more wedge-shaped head and a somewhat heavier bill. I'd never noticed this before, though it does probably bear being aware of, give that a female in amongst a bunch of males could give more of an Eared look in a few weeks if a person wasn't careful.

fancy pictures, but no red eye reduction on the new camera? ha ha, aren't i the funniest?