I had big hopes for this morning since it was going to be my first morning birding with the new lens, and sun was predicted on multiple weather sites. Over a decade ago when I had the opportunity to spend more time birding I was definitely more of a photographer than a lister. I remember not chasing a red-necked phalarope in Washtenaw since I knew it would be a ways from the road and I'd seen one the previous fall at Mouillee. I'm not sure that there's been one in Washtenaw since. Anyway, I was geared up in my mind to take some photos, but the light never improved above medium overcast, and I spotted a distant Red-necked Grebe, the earliest on the calendar that I've found a good year bird at Tiscornia. It did follow the identification by addition strategy previously referenced, a loon-like bird with a merganser's secondary patch. If it wasn't for the feet creating more "tail" projection than a merganser's, it would be a tough tough ID. As it was, I stayed with the bird long enough for it to flare its wings as it slowed to land, revealing the white leading edge of the inner half of the wing as well.

Anyway, photo highlight (out of less than a hundred shots most of which were experiments with Song Sparrows and a RW Blackbird) was a hen RB Merganser. If there'd been a little more light it would almost be a through-the-bill shot where you can see the light through the nostrils that can't happen to often with a flight shot... 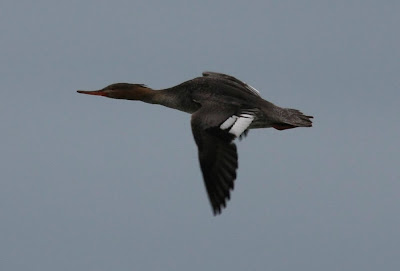 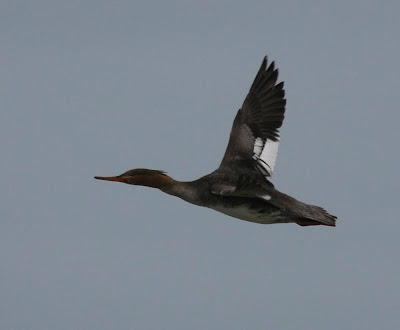 (If you did have the misfortune of clicking the link above back to my woefully poor comparison sketches of RTLO, RBME, and RNGR you can see how far off my merg was, could the body be any smaller?)