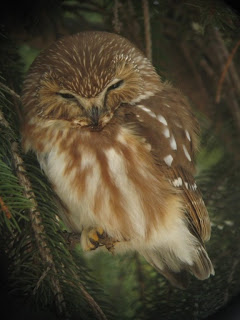 Today went on a L-O-N-G bike ride down to Riverside Cemetary near Three Oaks where a saw-whet has been staked out for most of the month. I havn't had much success at finding tough birds for my Bigby year and this bird has been tempting me; the trick has been to find a day off with the right wind conditions (mild headwind on the way down, tailwind on the way back) to attempt the 52 mile round trip (mostly going south, but somewhat west as well).

Today dawned 20 degrees, but calm winds made it feel warmer than I expected. ESE winds were to slowly build through the morning though after about 3 miles it was probably 10 mph. The ride down took about 2 hours and 15 minutes and the bird was right where it was supposed to be (on the same perch where I saw it the first time I drove down to it). A Sarett Nature Center van appeared just as I was leaving and I ended up spending longer at the spot than I'd planned. The first 5 miles on the way back were sheer slog straight into the wind but I eventually made it back in two and a half hours. 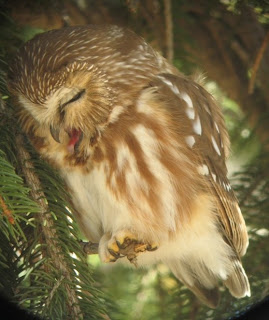 Yesterday we stopped on the way home to try to show the bird to (almost) 2 year-old Hazel who points at a picture of an owl in her animal sounds book and says, "ow-wel, hoo, hooo." I think it's the only thing she can both name and say the sound for. The bird was out in the open yesterday but there were too many distractions for Hazel to figure out what we were trying to show her. The bird blearily opened its eyes to slits, gagged up a pellet after a few tries, and then went back to sleep, settling its head into its scaps. The pics are obviously from yesterday.