Spent my last two days in Florida birding with two old friends from Ann Arbor, Don Chalfant and Roger Wykes. It was odd how the majority of the most interesting birds were northern ones. We went to the Volusia Co Landfill to look for a California Gull which Don needed for Florida (about a 5th state record or so). Before ultimately finding the California, both Glaucous and Iceland gulls were found, as well as good numbers of both black-backed gulls. When we checked Ponce Inlet, there were the expected royal terns and willets on the beach, but a purple sandpiper and a (staked-out) great cormorant as well. The gannets were pretty much continuously present out over the Atlantic as well. But of course there were fun southern birds as well, highlighted by the booby and that gorgeous spoonbill pic that I finally scored in Merritt Island NWR (it's slightly over-exposed, the bird flew before I could change the settings, but a picture I've been looking forward to taking for a long time: 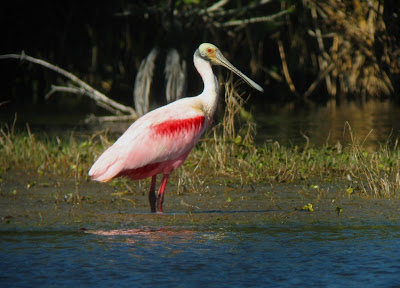