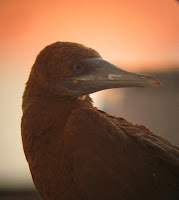 After spending much of an afternoon on the St Augustine Pier where an immature brown booby has been spending the winter seeing only distant gannets, I left an hour before dawn in order to hit the pier at sunrise. I was immediately rewarded; the bird was sitting on the end of the pier exactly where it was supposed to be. I walked out to the bird as the sun just broke over the Atlantic. It was shivering pretty violently until the sun had a chance to warm the bird. I guess it'd been captured twice in an attempt to "rescue" it, had been boated out to sea and released in the gulf stream, but had returned each time within a day or so. A fisherman caught a small fish, called to the bird ("hey you, hey, come here, hey you") and the bird waddled up along the guardrail and took the handout directly from the man's hand. I watched the prehistoric looking creature for quite about an hour before leaving it and heading back. 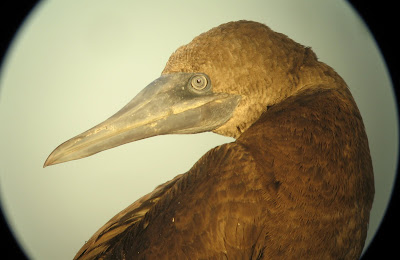