The Greater of two waxwings 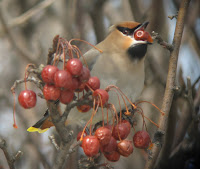 Bohemian waxwings have been invading Michigan this year and a large flock was discovered at the Whirlpool headquarters feeding in some sort of berry tree (choke cherries???), some people have seen up to 80 birds at a time. I didn't try to count them at all, but they were certainly abundant.
On Saturday I biked the 20 miles round-trip from the house to score them for my Green Big Year. It was a route I hadn't biked before (though I drive a stretch of it every time I go to work) and didn't realize how hilly it was. The snow wasn't melted off the sidewalks and only mostly off the shoulders of the road which made the trip that much more ridiculous. I lost breakfast after the worst of the hills (a shoulder-less S curve I couldn't stop on) but perservered, took a quick record pic and then turned around.
On Sunday we returned on the way back from church (seeing both a immature bald eagle as well as a northern shrike on the way) to try for better pictures since the sun was finally out. Efforts 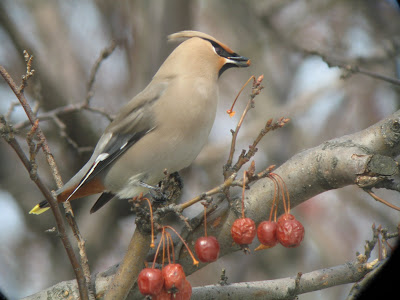 were hampered by the wind but I certainly improved the previous pictures I had taken in terrible overcast lighting. Hopefully they'll stick around and I can try again this weekend... The birds were quite variable, I hadn't realized how much variability there is in the extent of pink, yellow, and white in the wings. Only the birds with the brightest and most extensive yellow had significant pink wax tips. In the sunlight the brown highlights in the face were much more apparent than I'd noted before in the overcast.