Bigbying is not for the faint-hearted

Well, at the beginning of the new year there was a lot of talk on the internet about Green Big Years, basically a big year but without using gasoline. It seemed that

there was initially a lot of interest, however, based on the posting at the forum website http://www.sparroworks.ca/bb/index.php, it would seem that many people have realized just what a wondrous invention the internal combustion engine is, and just how difficult it actually is to bicycle places. So far I've ridden slightly over 1oo miles and totaled 58 birds (though only about half required a bike ride). Last time I rode this route I lost breakfast after a tough climb on a shoulder-less hill. Today it was much easier as the shoulders and sidewalks were melted at last. However, I managed to get thrown over my handlebars and face-planted when I didn't notice that there was one intersection without a smooth ramp back up onto the sidewalk and an 8 inch curb instead. Fortunately the helmet did its job and kept me from seriously hitting the sidewalk or from getting clocked by the 13 pounds of telescope and tripod that I was wearing on my back with the scope-pak. One of the knobs on the tripod gouged out a thumb-sized piece of hard padding from the back of the helmet on the impact. By the minor miracle brought off by the helmet the Leica was unscathed and I had only a minor bloody nose and swollen knee cap so the Bigby year will continue. Our location in the SW corner of the state would seem like a good one to post a pretty good number for Michigan. I think that I should be able to tally 215 birds without too much difficulty assuming my knees hold up, but upwards of 240 could be possible (last year in the county I had 259 though that's a number I probably won't approach again without a concerted effort).
At any rate, did make it to Tiscornia Beach where in an hour and a half there were probably 400-500 ducks, about half loafing off the pier and the other half moving (mostly south) offshore. Probably 3/4 of the birds were divers (about half both scaup) with good numbers of redhead and white-winged scoter, fewer surf scoters, ring-necked duck, canvasback, common merganser, goldeneye, and bufflehead, and large numbers of red-breasted mergansers. The dabblers that flew by were mostly mallards but included pintail, black duck, and both teal as well. Two red-throated loons also flew by. All nice birds, but no real big-ticket items. 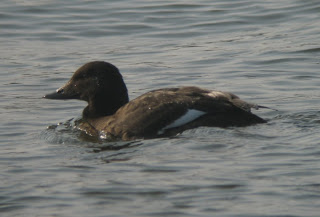