Who cares if it's sandstorm level S winds?  Who cares if you're the most wind-blown bird in North America?  If it's strong S wind that means you fly directly into it, right? Cave Swallow don't care!  Two years ago when we had Berrien's first Cave Swallows it was practically a gale (it was the Declan Smith windstorm whose 50mph gusts knocked over the tower at the ND football practice killing the cameraman).  Last year when Tim had one it was also strong S winds, today, 2 years (and 2 days) from our first 5 birds, 22 birds flew past Tiscornia, all bee-lining south.  We were up on the dune as there were decent numbers of shorebirds and passerines (mostly siskins) moving in front of tomorrow's front including 19 Long-billed Dowitchers that hopped over the pier and had two decent sized groups (first 7 high birds) go past the end of the pier and then 5 birds following a large Horned Lark flock that went past lower by the end.  We moved out to the end and after about 30 minutes a group of 10 materialized on top of us as they whipped past.  We both blasted away.

This is a crop of my best shot, nearly my last one of the tail end of the flock as they got far enough away that the camera focusing on the water sort of had the birds in a similar focal plane.  Unfortunately these are a little over-exposed as I was expecting the birds to be higher with light sky behind them, not dark water.

The next pics are montages of individual birds cropped out of multiple images as I panned through the flock.  These 4 birds were in a little sub-group, I cut out each individual to make it easier to evaluate each one. 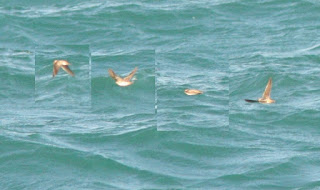 The next 2 individuals are from 3 later frames. 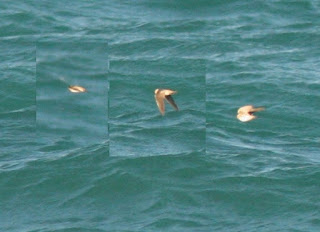 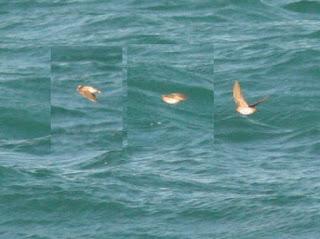 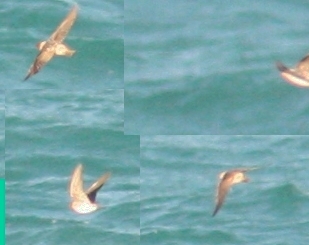 Not surprisingly, Tim's shots are a lot sharper.
Finally a group of Long-billed Dowitchers that flew past at first light.  Unlike the swallows, they were a Tiscornia tick for me. 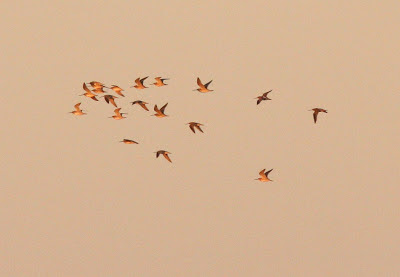 In addition to the 10 birds photographed and 12 other birds were conclusively saw, there were 2 more identically shaped swallows that cut across the pier and were completely backlit.  The first time we had Caves the committee rejected the first 3 that were written up but not photographed and I'm not completely clear on what they did with the 2 that we photographed.  Tim had excellent shots of one of the birds, that one was accepted.  The 2nd one, which admittedly is a crap blur in one of my shots, was accepted on their site but not in North American Birding or the other way around.  Either way the majority were ignored since alpha error (saying something is something when it's not) apparently cannot ever be allowed whereas beta error (saying something is not something when it is) is quite acceptable.

That also says nothing of the improbability of mis-identifying Rough-winged or Cliff Swallows as Caves and then subsequently photographing Caves an hour later.  In medical trials this idea is that of being prospective, meaning that you have a theory and then instead of applying it backwards to a set of data, you measure how it works going forward to prove that you are not just forcing your theory onto a past set of data.  When it works going forward (i.e. subsequent birds that we identify as Caves that we photograph as Caves) that is strong support of the original theory (of being able to use binoculars and telescopes to identify birds, not just a shotgun, er I mean camera).

Oh and by the way, even if you think it's hard to photograph a swallow, it's actually harder.
Posted by Matt at 2:27 PM