Back in the (Western) saddle

They did indeed let me go home last night.  I had planned on mostly relaxing on my couch today, but when Tim found a Western Sandpiper on the pier I couldn't not go after a bird that hasn't been seen in the county since the 90's.

Typically Western is one of the brighter peeps.  This one is a faded adult that's moulted its scapulars to winter gray but retains faded wings and a few black flecks along the flanks retained from breeding plumage. 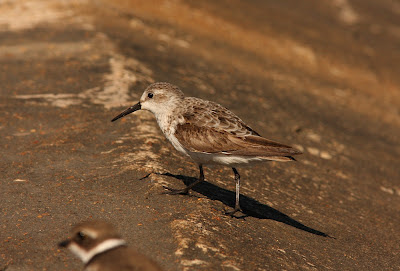 While some Semipalmated sandpipers do have longish bills, I doubt any are quite as long as this birds.  No Semi has as nice a taper and droop. 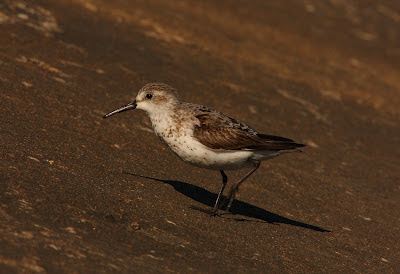 A semi also won't have the flank flecks.  White-rumped could have that though it would have wings projecting past the tail, a reddish bill base and would lack the webbing of the toes that Western shares with Semi-palmated. 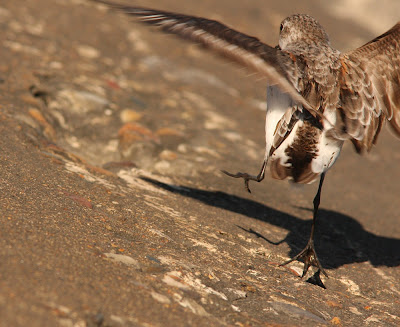 Dunlin would also lack the semi-palmations, would be a larger bird with an even heavier bill.  With the wings fully flared you can see a little rufous in the central scapulars even in the presumed winter plumage.

The bird mainly hung out with a flock of sanderlings that was moving back and forth between the beach and the piers. 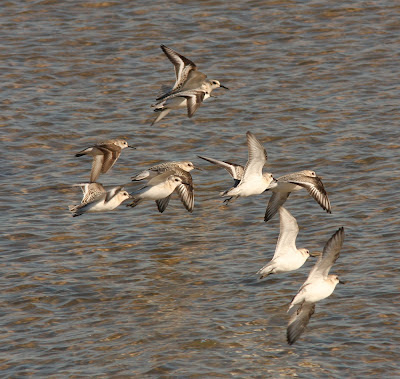 This pic again ties my personal best 4 species in one frame at Tiscornia.  I think the last time I did it was with essentially the same species, just semi instead of Western

I'm now safely back on my couch where I should be able to stay for back to back football triple headers ... unless of course there's something requiring my attention at the pier.  Thanks to Tim for schlepping my scope (stupid 10 pound weight restriction). I was probably looking pretty pitiful shuffling along.
Posted by Matt at 1:07 PM