I had my first sniff of fall migration in the place of 2 Willets at Tiscornia and a 3rd that Tim spotted at Silver.  All of the birds were adults, presumably failed or non-breeders this year.  This is the Silver bird, flying out to join the other two over the lake: 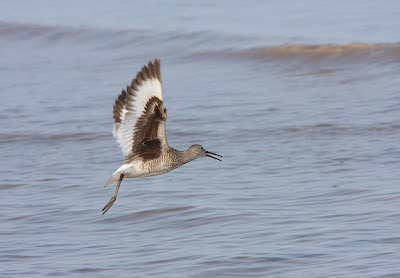 Since actually it's still obviously summer (and the Allied invasion of Tiscornia preparations closed the beach) I pretty quickly shifted to ode mode.

This is a female Eastern Forktail damselfly which has captured a teneral (freshly emerged) damselfly of some sort.  It slowly chewed its victim's head off leaving it dangling before starting in on the thorax.  I guess acetone isn't really such a bad way to go in comparison... 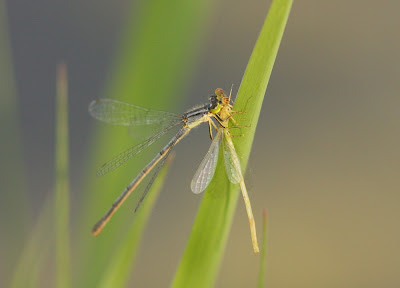 Here's the male; in a lot of odes the female is bulkier to make egg formation less taxing. 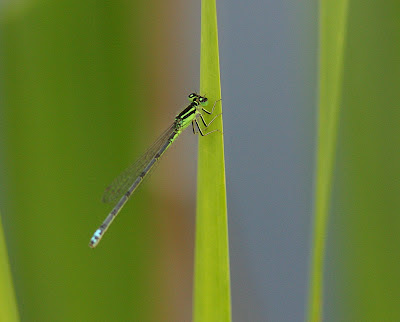 Saddlebags dragonflies are fairly common right now, the overwhelming majority are Black, a few are (lower-case) red (both the more expected Carolina as well as Red Saddlebags are red).
I'm fairly sure this is Carolina Saddlebags based on the purple frons (nose) and the shape of the pale notch in the colored part of the wing, but the photos of this rapidly flying creature aren't sharp enough to say for sure what's going on with the distribution of black on the tip of the abdomen. 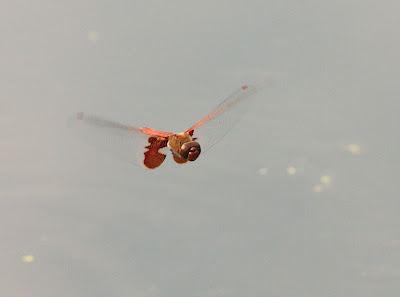 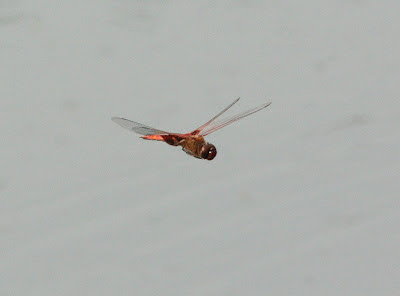 The saddlebags are large, aggressive, and relentless in their patrols of their strip or patch of water.  I've never seen one land.  They frequently interact with other species (especially the larger ones) to chase them off.  I actually caught a Black Saddlebags by accident a week or so ago when I was late in my swing at the Slaty Skimmer it was chasing.  Of course since it was the first Black Saddlebags I'd seen and I hadn't seen a Widow Skimmer that day (a sooner emerging one also with black patches in the wings, though admittedly with a way different distribution of color) I let it go thinking it was a Widow Skimmer, which wasn't needed for Berrien.  Oops.  At least they're common (though hard to catch) and I re-bagged one this morning. 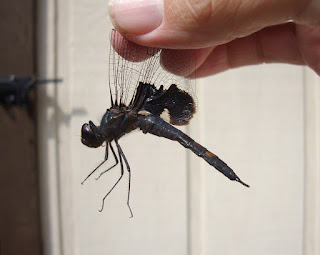 I actually saw my first perched Black Saddlebags last weekend. Perched in the top of a tree, about 25 feet up. Oh well.

It looks like the red-colored saddlebags is Tramea onusta. The frons are reddish and the black appears to be restricted to the top of the abdomen.