I was really surprised by this book.
Honestly, I didn't really want it, Tim wanted it so I said I'd review it for the free copy and give it to him.  We-ell, I liked it enough I had to buy one for myself.  I had no idea Dragonflies (and their smaller cousins the Damselflies) were more colorful than butterflies.  I've been converted, especially during the lazy summer when the odds of encountering interesting birds amongst the local breeders is a lot less.  Realize though, that even with a good book, you can't identify everything in the field.  A lot just move too fast to get a good look at, or require careful examination of the clasping organs to identify with certainty.  As with bird, immatures and females can also be frequently more confusing than adult males.

When Odonates (dragonflies and damselflies) mate, the male uses claspers at the end of the abdomen to latch onto the female by grabbing the back of the head, the female then arches her abdomen forward to bring the genitalia into contact (these Pondhawks are from yesterday): 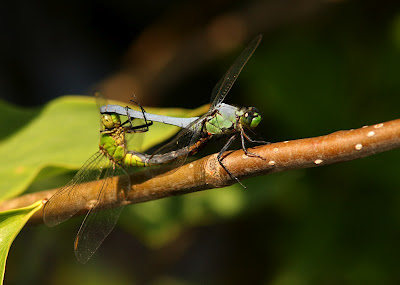 The interface between male end of the abdomen and female back of the head is somewhat of a species unique lock-and-key so there're some species that you have to use a magnifying glass to evaluate adequately, which takes experience.  I've gotten a lot better in just a few months getting a sense of where generally in the book I'm looking for a specific bug (which I think is my biggest critique of the book, I wish there was a beginning section that explained what makes, for example, something a dasher vs a sprite vs a forktail - they're all just blue damselflies to me); I'm frequently reduced to leafing through page by page), and it will take more experience to get a better comparative sense of the claspers as the differences often are nuanced and minute.  That being said, most species do not require a magnifying glass; a photograph (or good look) will usually be enough.  (Though not for the powers-that-be, first ode records for any geographic area require a specimen due to integradation and hybridization.  And unless you live in Washtenaw or Wayne, you'll find a lot of species that have never been vouchered by specimen.  Here in Berrien only about a third of what should occur here has been vouchered).

But to prove my point about the colors, here's photos I've shot of Odes this spring (and summer)... 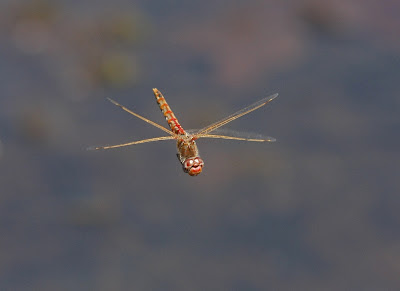 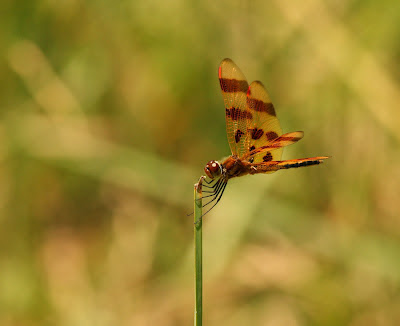 Yellow - (Midland Clubtail in a jar destined to be a specimen): 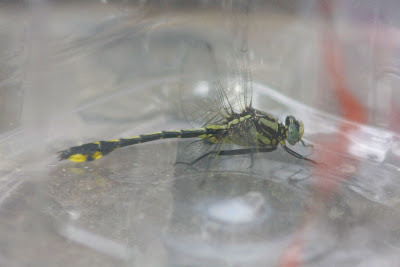 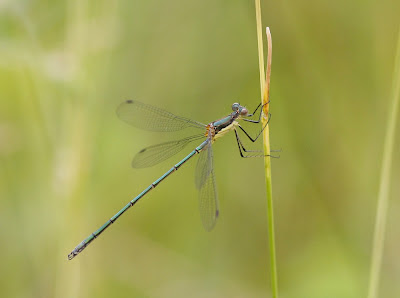 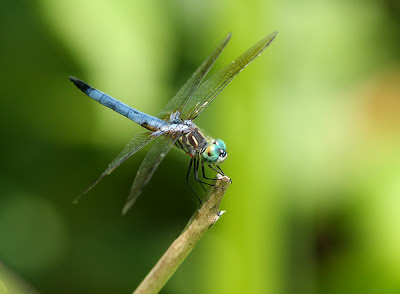 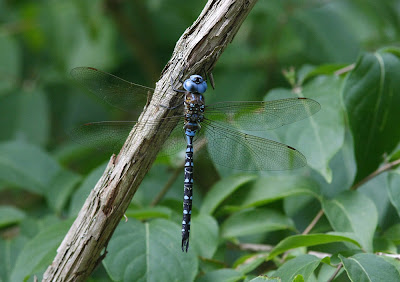 Violet (Slaty Skimmer - ok kind of a stretch, you'll just have to wait until I get a Variable Damselfly) 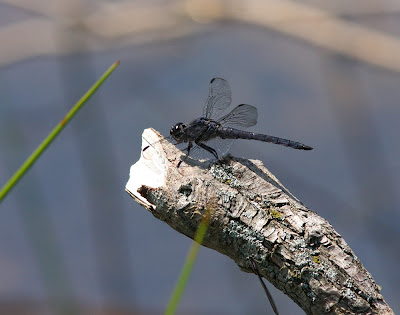 Basically, I'm now taking a net with me whenever I go birding (that ratio of only about a third vouchered holds for the above group for sure, I've collected one of most of them though the meadowhawk and spreadwing eluded me.  Only the dasher and the clubtail have been captured in Berrien before and clubtails are really hard so I kept it too.)  Right now at least, I'm actually targeting Odes more than birds!
Posted by Matt at 5:18 AM

Matt, it's excellent to see that you're helping to fill in the gaps of knowledge with the vouchers. Good luck with the swing of the net!