no, he's Laughing at you

especially when you still need Franklin's for the year. This 2nd calendar year Laughing Gull flew by Tiscornia a few days ago and landed on Silver. 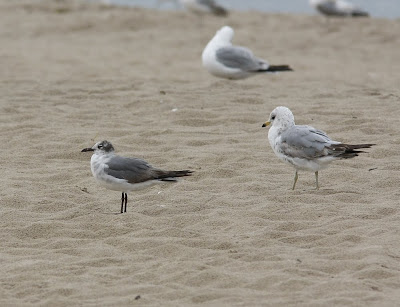 Franklin's is much more common in this appearance, every other Laughing Gull I've had over here was a full adult, though Tim photo'd a juvenile last summer/fall. ID points at rest include the longer bill, somewhat ratty hood (though not all Franklin's have the real nice clean half hood) and the un-moulted ratty wing feathers; Franklin's moults its wing feathers twice a year. As it lifts off, the spreadwing is just plain dark, Franklin's would have white-tipped feathers with sub-basal white bands by now as well. 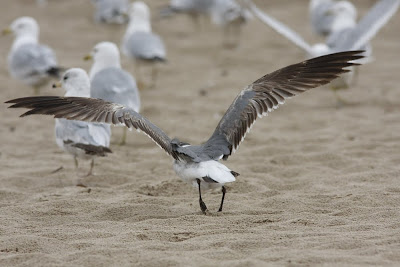 In full flight as it went by initially, it stood out as being darker than the typical ring-billeds with the darker mantle and partial hood. Franklin's has a different flight style though, and is more narrow-winged, this bird was Laughing from the get-go.

I'll bet if I told you I had a flock of large brown birds with long necks on the beach in the first week of June you'd think I had a whimbrels, but no. 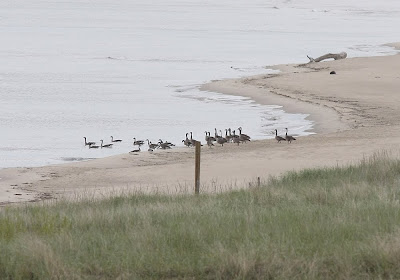 This morning I walked out the "easy prairie" blowout in Warren Dunes at daybreak hoping to hear Kip's Bob-white. It was pretty windy though. A couple of the Prairies tee'd up distantly. 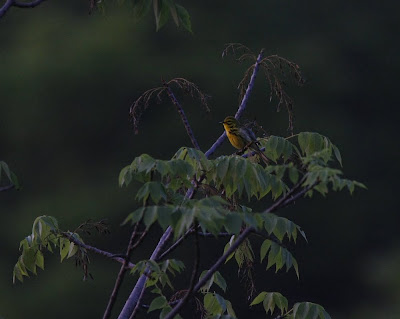 Finally a few tom Turkeys came out into nice light along the entrance road. 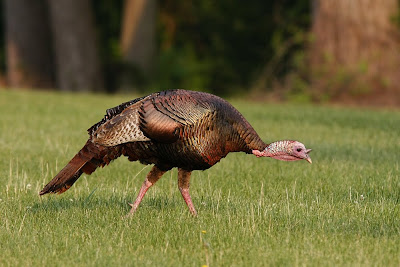 On the way home I picked up a Grasshopper Sparrow, the last easy bird of the year. Everything else will require either dedicated searching, or considerable time investment along the lakeshore.