After about 5 years of hawk-watching attempts in the dunes, we hit ideal winds with remarkable results. After a couple days of north winds shutting down migration during which the big low pressure tornado system in the southeast caused a lot of westerly winds. Last night it turned around out of the southeast pushing birds northward at last. SE winds push the raptors up against the lakeshore concentrating them.

We'd only been up in the dunes an hour when this bird appeared: 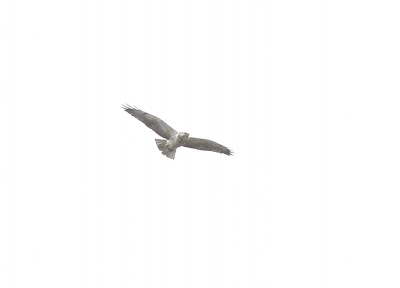 It's a first spring Swainson's Hawk. 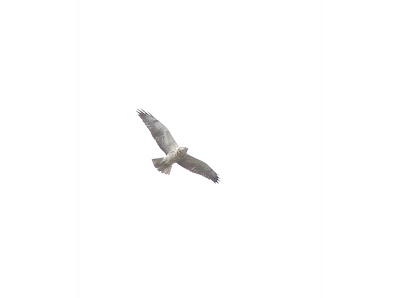 The bird stuck out even with binoculars. We both were watching it in the scopes when Tim made sure I was on the bird. The long narrow wings with a darker trailing edge to the underwing made it a pretty good Swainson's candidate. If a person depended on plumage though, it likely could have been passed off as a young redtail as the upperparts were a plainish brown and it still has a mostly juvenile head and neck pattern lacking the contrasting face and breast band. An adult would also have even darker flight feathers (see the difference several photos farther down this post between adult and first spring Broadwing). 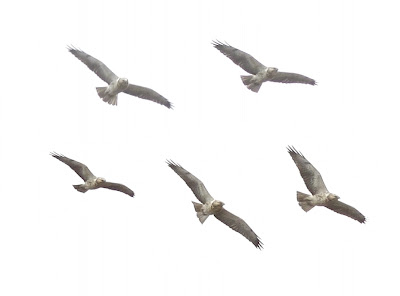 While Swainson's was very much on our radar, I never expected to see the next bird in Berrien. The first instant it appeared in the bins the all white head made me think Mississippi Kite. The next instant the buteo shape came out; Ferruginous was the next thought in my mind, but it clearly lacked the rufous thigh V. Tim put the name to what it had to be, a Krider's Hawk: 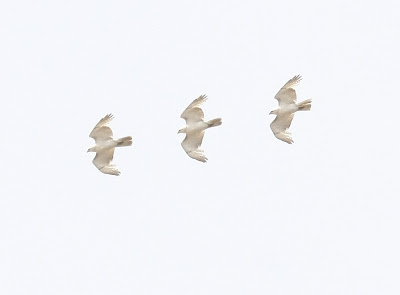 You'll have to take my word that the the un-photographed back was a grayish brown, the tail grayish with a whiter base. The entire head was white however. The upperparts of the flight feathers showed paler contrasting sections in some of the un-moulted sections. ID points are the white head, white tail, lack of a belly band, and in the underwing very pale pantagial bars (the dark feathers on the inner part of the leading edge of the wing) and pale commas. If I read the book correctly, Wheeler (2003) considers Krider's to be the light morph of the Eastern redtail. Sibley says that it's always outnumbered by "normal" light morph birds without attempting to define it with a trinomial. Ligouri and Sullivan (2010) propose that it once was a distinctive subspecies of Redtail that is getting swamped by coming back into contact by the other subspecies. As I read Wheeler, I see that his winter range map puts the bird into southern Illinois and eastern Kentucky, so perhaps this bird should not be as uncommon in Michigan as I would have expected. That being said, I see that the Krider's is a MBRC review bird, but I find no records in the searchable data-base. Maybe they're just not being submitted, or perhaps since they're just a subspecies/form they haven't been put into the database.

Next is a more typical red-tail, again a first-spring bird: 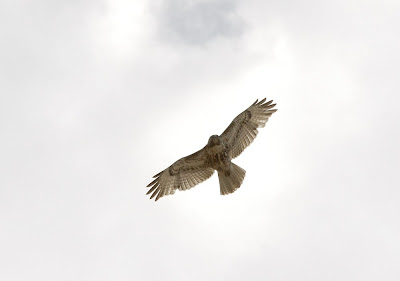 Broad-wings are the species most associated with high spring migration in many birders' minds. I only clicked off 26 though; I would have predicted a much higher count on the day with a Swainson's. They were all ones and twos however, 25mpg SE winds (with faster gusts) probably prevented thermals and kettles from forming. 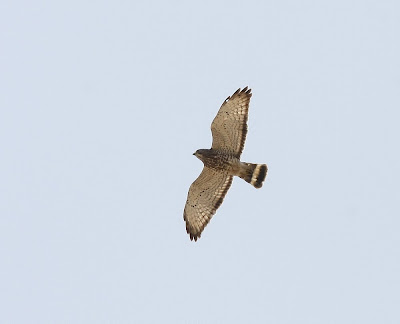 The differences between the adult and first spring Broad-winged is similar to Swainson's, note that the young bird in the next pic has retained juvenile facial pattern and much more muted patterning to the wings and tail... 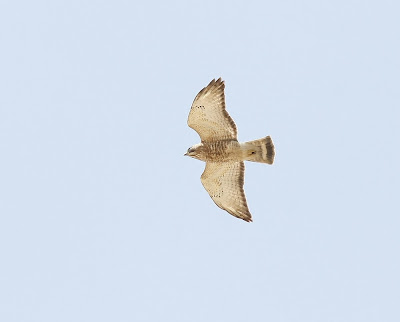 Sharp-shins were the dominant species. Tim clicked off over 150, though some certainly slipped past us. It looks like I managed to delete the best sharpie pic in the editing process...

And for those of you who would like to return to the more typical May fare, here's a Swamp Sparrow in decent light. 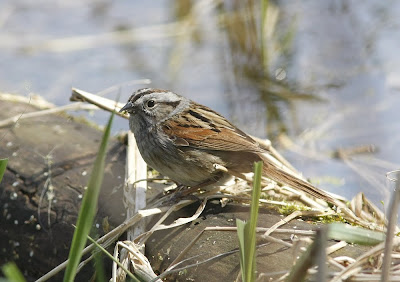