I pulled into Tiscornia this morning. The first thing I noticed was Tim's car in its expected location at the University of Tiscornia Official Counter "reserved" spot. The second thing I noticed was a mockingbird flying across the road. I hit the brakes, lowered the window, fired a sequence of frames and reached for the cell phone. Ten seconds later Tim appeared jogging off the side of dune, worked his way around, and ultimately pushed not one but two mockers back towards me. There's a decent chance this is the pair that was at Jean Kloch last year (or possibly offspring) dispersed by a large amount of brush clearing that's ongoing there at present. 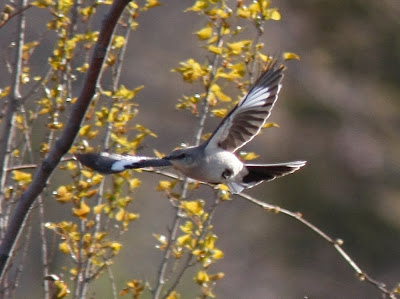 To our knowledge, this is the first record of Mockingbird at Tiscornia.

We lakewatched for a bit without appreciating much in the way of movement and then walked the dunegrass to see what we could kick up. We stopped after a bit upon hearing some rustling in the grass. We expected a rodent or something; much to our surprise, this ran out... 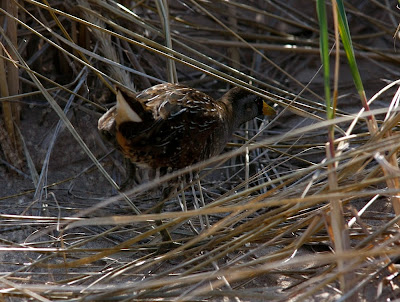 Another bird new for the park to our knowledge. The bird would dart generally faster than our auto-focus, both of us achieved our best results by reverting back to manual focus, good to know for next time when it's a Yellow.
There wasn't much waterfowl movement, but the RB mergs that were close were courting. The female would call and the males would respond more loudly and exaggerate her movements. 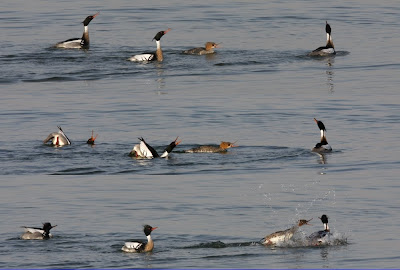 The time lapse collage shows how the male on the right doesn't do the display and the female promptly chases him away. Kroodsma describes in The Singing Life of Birds how female cardinals choose mates based on how closely they listen to her and mimic the song fragments she initiates. I haven't really thought of females actively chasing away potential suitors however; most of the time you see the female just flying away. CW Townsend (apparently not Townsend's Warbler JK Townsend and I don't think Townsend's Shearwater CH Townsend) described this courtship behaviour in the Auk in 1911. He does describe the female at times chasing out at a male, but didn't make a big deal about it. I came across a figure from The Handbook of Waterfowl Behaviour online; it'd be nice to know what's described in the book itself (somehow I don't think I'm going to find it any library locally).