If you'd like to learn to mis-identify birds, one important rule to follow is (Over)-Confidence is Everything. You should keep your reference books in nice mint condition on the shelves at home and prevent them from getting used and abused in the field. That way, when you kick two meadowlarks out of the grass and notice that one has a white malar and one has a yellow-ish malar, you can choose the wrong one to focus your attention on. You can ignore that one is plainly sandier and more washed-out than the other (and rationalize that by observing that winter-plumaged meadowlarks are duller) to focus attention on the obvious Eastern Meadowlark on the upper right in unsuccessful efforts to make it a Western: 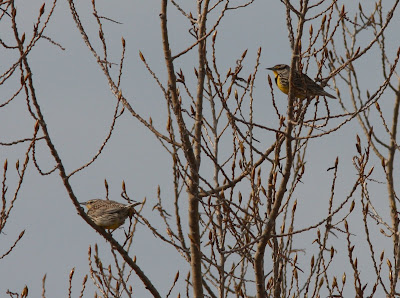 Fortunately the camera gives us a second chance, even if I was timing the shutter to optimize images of the Eastern (this is one of only 2 frames that show the paler bird's face). Next is a crop of the above photo. The bird on the left has paler marking, yellow washing up on the malar, and little contrast between the pale brow stripe and the upper area of the cheek patch. The bird on the right is marked darkly with a white malar and much more contrast to the face pattern. Open up Sibley, Pyle, or National Geo, and it's fairly plain to see that the bird on the left is a Western Meadowlark. Furthermore, if you read Pyle, you see that it's in August to January (September to January in Sibley) that the birds are paler and washed out. In essence, 2 bits of mis-applied knowledge (forgetting which one has some yellow extending onto the malar, and the timing of paler plumage) led us to conclude in the field, "Huh, something doesn't seem right about this, too bad they didn't call," when it could have been, "Western Meadowlark 9-o-clock in the tree, on it? First Tiscornia record. Ni-ice."

Not convinced yet? Do you think that, well, maybe it could just be paler because it's an atypical bird in mis-timed moult with some weird lighting artifact making the anterior malar washed with yellowish? Fortunately, we were lucky enough to collect more data. What turned out to be the Eastern flushed at angles that the cameras didn't pick up very much on it. The bird that turned out to be the Western flushed much closer.
Here's the bird flushing in front of Tim: 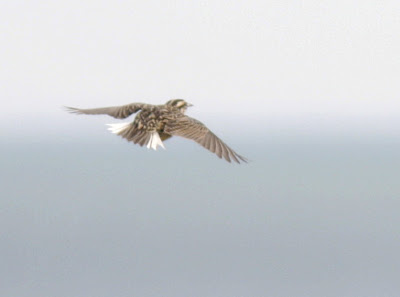 I was about 20 yards to the right so more of a side view for me: 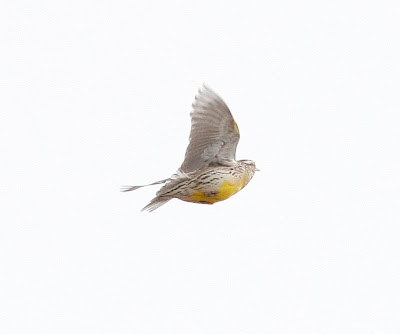 What we see is a bird with 2 white outer tail feathers (r5 and r6) with a third feather (r4) that has dark coloration along its leading edge with a larger white pane on the broader trailing/inner "half." Sibley does note there is some overlap generically between the two species on the extent of white in the tail, but fortunately in Michigan, the subspecies that we encounter do not overlap. In Michigan, per Pyle range descriptions, we have the neglecta Western Meadowlark (which has the exact tail pattern of our bird with white r5 and r6 and partially white r4 as illustrated in Nat'l Geo and Pyle) and the magna Eastern Meadowlark (which Nat'l Geo and Pyle agree has 3 solidly white outer tail feathers (r4-r6) with r3 being partially white).
Note that the tail patterns exhibited by some of the other subspecies is more muddled. Pyle and Nat'l Geo disagree on the pattern shown by the confluenta Westerns of the Pacific coast states as well as the pattern exhibited by argutula Easterns of the southern Great Plains. Fortunately neither of those subspecies is very likely to occur here so the tail pattern is also helpful.