NOMO is still the theme

NOrthern MOckingbird was the highlight of the last post. NO MOmentum is what I have right now. Five days ago Loggerhead shrike would have been a state bird for me but the bird went unrecognized until long after the freshly disked field in which it spent at least 2 days foraging dried out. Three days ago an Upland Sandpiper was found but word wasn't put out until evening. Another potential county lifer, Yellow-headed Blackbird, appeared briefly at a feeder but to my knowledge has not re-appeared.

I've spent entirely too much time the last 2 days on Buffalo Rd. Smith's Longspur has also been found there again this year.

Lots of these (though not all with this much black) ... 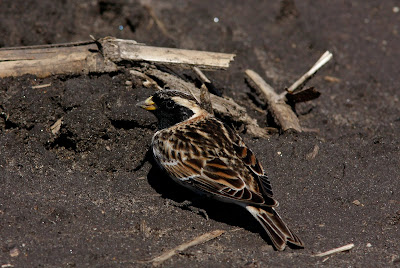 If you get the exposure wrong a picture can look more Smith's-like than the bird does in real life. The solidly medium brown ear covert, along with the more heavily streaked face of the female Lappie are still there, however. 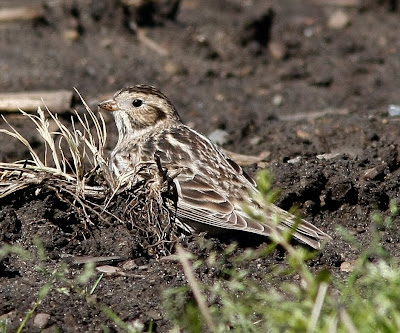 Just for the sake of pulling an article, Sullivan and Kershner reviewed longspur ID in the October 2003 Birding magazine. They also point out that Lapland typically has multiple primaries visible (there are at least 6 in this picture) whereas Smith's typically has 3 or at most 4. 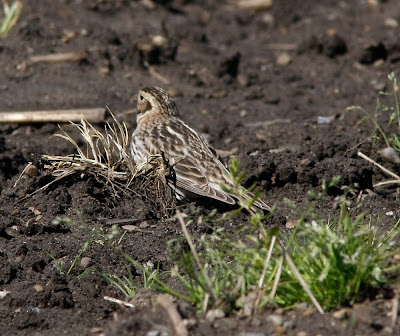 In spring adults though, this sort of stuff is pretty academic; in real life the feeling of most observers along Buffalo Road last spring was that the females of the two species weren't really that hard to tell apart.
Seriously though, if I can't find some quality birds in the next 2 days then I feel a big fat flower post coming on.

Aww I am so sorry. If I ever see one again I will let you know first. Deal? :)