My plans for today were to head down to Floral again, the best migration spot, to try and knock off a couple more of the remaining passerine migrants (yellow-bellied flycatcher, olive-sided flycatcher, gray-cheeked thrush, and Philadelphia vireo), since I probably won't be able to get back out before migration is really done with my work schedule. However, the forecast called for NW winds which would give me a direct headwind for the 15+ miles back and I decided I really didn't want to face that kind of obstacle on tired legs so I started north into the wind heading for Sarett Nature Center for a number of the harder residents and still with a shot at migrants.

I had traveled most of the way there when I heard one of the targets, an orchard oriole, singing from a line of maples over an overgrown pasture. After stopping for a flock of warblers at roadside (the best flock I would find all day) including male BT green, cape may, and redstart and female black and white, I started picking up grasshopper sparrows in some of the overgrown fields around Sarett. A few miles farther down the road at Brown Sanctuary the chat was quiet when I arrived. I headed down to the marsh quickly hearing soras (which were silent for Birdathon) and eventually hearing marsh wrens (also silent for Birdathon), and not hearing the Virginia rail we had then. Prothonotary warbler was the next target and it sang more or less on cue after a great-horned owl flushed down the river (also missed a few days ago). By the time I made it back up to the bike the chat was singing. I waited a little to see if it would come out in the open without success. With that it was back to Sarett to try to pull out one of the migrants. It was still quite windy and I found it hard to find sheltered areas that could harbor the birds. There were a few birds around, black-throated green, chestnut-sided, and a yellow-throated vireo but I found it slow going with the exception of the empids. Least flycatchers seemed to be setting up territories everywhere and were singing and perching prominently, allowing good scope views for study. The olive backs were not really that contrasting from the rest of the bird at all. The difference between them and the yellow-bellied that appeared, calling, was quite pronounced, with the yellow-bellied being a much greener bird overall with warm yellow wash across the flanks and belly. Arguably, the yellow-bellied was the bird I most needed given that the others can still be found in few months (just gotta get the olive-sided before they disappear at the very front end of southbound migration) and they'll be virtually un-identifiable in fall. 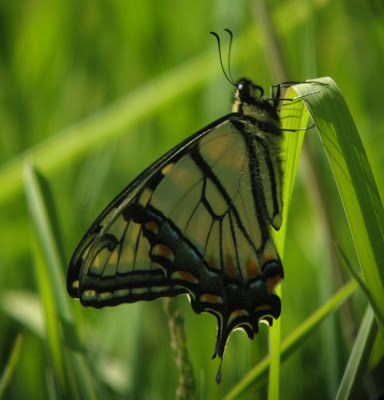 After getting some decent pics of a tiger swallowtail warming up, it was off to the lake, stopping first at Jean Kloch park to pick up the red-headed woodpeckers before their snag is razed in the "progress/re-vitalization" process of turning a public park into a private golf course (don't ask). I stayed long enough to glimpse a bird but given that a car was parked underneath it in the remote corner of the lot probably dealing drugs I didn't stand around staring in that direction with binoculars waiting for a leisurely study.
Today was one of the 90% of days that Tiscornia Beach held only typical birds, Caspian and common terns, a couple dunlin, a sanderling, and a semipalmated plover. The ultimate success of the Bigby year will lie in how often I can get there to turn up the "good" birds.

Today's specimen is an unfortunate yellow warbler picked up off the curb that will soon permanently reside in a drawer at Andrews. I couldn't believe how tiny the bird actually was, much shorter than the short dimension of the ziploc bag I stuck it in. Kind of a shame that such a minute bird would survive a Gulf crossing only to get hit by a car on the breeding grounds. Also went past a squished thrasher right about where we got one on birdathon last year. 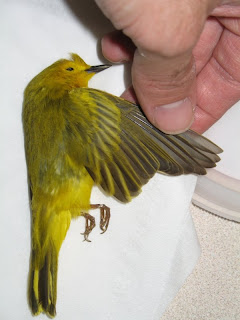 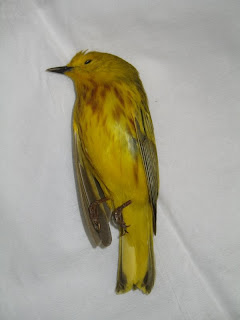