A new record (with just a little asterisk)

Yesterday Tim Baerwald, Craig Bateman, and I participated in the Berrien County Birdathon with excellent results. Last year Tim, Andre and I had the winning total with 152 species, but well back from the record of 166 birds set by Adam Byrne, Brad Murphy and Kevin Thomas in 2000. We were hoping to improve our total this year.
This year's day started quite slowly when we met at Love Creek just before midnight in a windstorm and as we were leaving for the first stop I realized I'd forgotten my binoculars (DOH!!!). The day had to go up from there right? Fortunately my house is right in between 2 of the planned night stops. The night-birding was difficult. At one point Craig checked the weather report on his cell phone and found that the current conditions were 15-20mph winds out of the North with 35mph gusts.
Remarkably at our first stop we heard a whippoorwill calling, a bonus bird to get us out of the gate along with the grasshopper sparrow we were there for. It was much more difficult to find the well-known chuck-will's-widow on Jones Rd. We went all the way up Jones and were onto True Rd before we started getting occasional sniffs of the call. It took over twice as long as scheduled, though, before we'd all heard it. That was the theme for the night, we couldn't get a rise (or at least an audible rise from screech owl) in multiple locations, ditto for sora. We gave up on sedge wren spots after a while. We did score a Virginia rail at Brown sanctuary after a long period of listening. Barred owl, at least, called undeterred from various locations. At Chikaming a mother woodcock didn't flush until underfoot, forcing us to detour around the camouflauged babies: 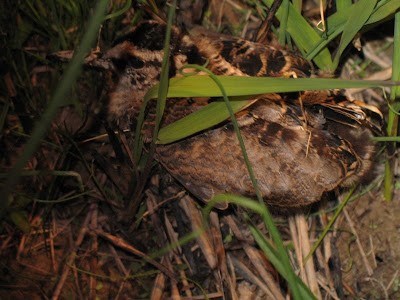 Finally, just before dawn we found a sora at an un-planned stop in the south county. We missed whip and VA rail last year so we ended up only down one bird from last year's pace despite the wind, which all things considered was not a bad result.
We actually debated as we were heading for our dawn chorus spots whether we would bag our route and head up to Floral Lane instead where some of the better spots would be well protected from the wind by the high dunes. We decided to stick with the route and see what happened. Fortunately, the wind died off as the sun rose (behind the overcast) and warblers started coming much easier than they did last year. We left the Lakeside/Forest Lawn area with 14 species of warbler and a bonus sharpie, and after stopping at 3 Oaks ponds for the only shovelors, blue-winged teal, bufflehead, and lesser scaup of the day (with bonus orchard oriole and flyby cedar waxwings) picked up a few more (including our only golden-winged, gray-cheeked thrush, and I think our only pewees) at Warren Woods. We arrived at Floral Lane at 9am with close to 110 species and started cleaning up the holes in the checklist quickly. White-throated, white-crowned, Lincoln's and swamp sparrows were around the feeder I'd put up a month ago. Tim picked up a clay- 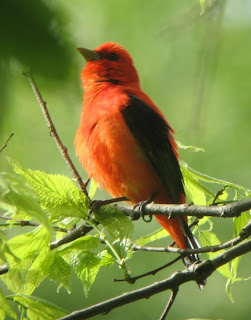 colored not far from it as well (which caught me offbalance crossing the flooded trail on a wobbly log so I missed what would have been a county lifer). Not to worry though, after picking up another 5 or so common warblers and RC kinglet (along with a not-so-common Connecticut found by Tim) Jon Wuepper asked us if we'd heard the least bittern ... uh least bittern??!! We retraced our steps and heard the bird we must have walked right past while concentrating on the warblers, backing into a sweet county lifer. We kept picking up birds as we went down the best section of the Yellow Birch trail, and then picked up more as we doubled back including goodies like orange-crowned and then a Kentucky that Phil Chu stayed with long enough to see. We went up top into the dunes long enough to hear multiple prairies as well as vesper sparrows and then it was back to the car to start picking up stake-out birds in various locations, i.e. PB grebe, RH woodpecker, greater scaup (thanks Kip), a bonus kingfisher at Grand Mere, before hitting Tiscornia finding 3 species of terns and a turnstone and then up to Sarett. Brown Sanctuary produced big time with a chat singing on the way in, a sandhill crane out in the marsh, a summer tanager above the trail on the way to the prothonotary which wasted no time in calling, then another little flock of warblers with another great look at an orange-crowned.
From there it was on to the shorebird route, with various puddles along the way producing good looks at bonus white-rumped and semipalmated sandpipers before hitting the Avery Rd area which gave another boost with pheasant, willow flycatcher, dowitcher sp, greater yellowlegs, Brewer's blackbird and horned lark. We worked our way back up through the county looking for more stakeouts, dipping on Red-shouldered, picking up marsh and then sedge wrens, getting brown thasher instead of western meadowlark at Anna Lane, picking up Carolina wren with a lot of effort, finding a flicker at LONG last, and then a western meadowlark and harrier within seconds of each other. Finally, we had nothing left but a kestrel field and the Eau Claire ponds. The kestrels made 164, and 2 more birds could get us tied with the record, could Eau Claire do it? Unfortunately not. There were good birds there, black tern, dowitchers again, but nothing we didn't already have.
We arrived at the dinner happy, amazingly with no major misses (except the wind-blown screech owls). At the wrap-up banquet though, we heard about a surf scoter found by Scott Jennex, Jeff Schultz, and Josh Haas and couldn't resist going back out afterwards for a shot at the Berrien record. We arrived at Smith lake at dusk and found the bird without much difficulty. Nighthawks appeared over the lake, new for the day, and now we needed only the screech. We perservered, and after much whistling (and ultimately resorting to a tape), heard one distantly for 167. SO, the bird-a-thon record stands, but we did finish with the best Berrien day yet. Clearly, this was a great day to do a Big Day given that 4 or 5 teams tied or exceeded the 152 species we won with last year (including one that traveled less than a third of the mileage!)
And though wildly-exaggerated tales may be told of my driving, we encountered 3 cops during the course of the day and have 0 tickets to show for it (including one on the last ditch effort to get to the scoter before darkness).
The scarlet tanager photo, of course, was taken a couple days ago. Seeing that gorgeous species was the highlight mentioned by at least a couple teams at the dinner, but I realized in the setting of the big day I hadn't bothered to actually look at a single one all day! Good thing birdathon only comes once a year.
Posted by Matt at 7:08 PM