Berrien County of course.  The MBRC page is still in the slow process of being re-built.  A quick look at eBird shows 5 Cal Gulls for Berrien and 3 for the rest of the state.  There's probably 20-30 records for the state so clearly they're not all in the eBird database.

There were a lot of gulls on the beach at New Buffalo this afternoon, constantly getting re-shuffled by beachwalkers.  Allen Chartier spotted this bird as I was combing the Ring-billeds for Mew Gull candidates. 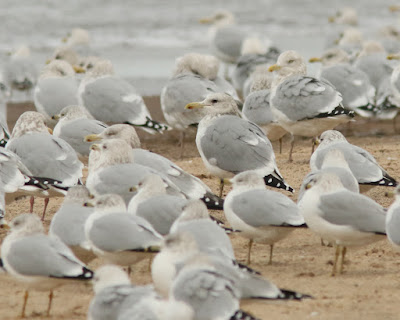 It was fairly distant at first and the dark eye and slightly darker mantle made it initially a Thayer's candidate.  It's bill looked way too long though as evidenced by this crop, and after a bit the bill patterning and leg color came out revealing it as a California.

It kept its head in its back preening for a frustratingly long time, but eventually spread its wings. 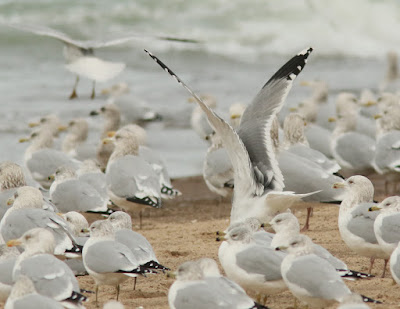 Extensive black with a fairly sharp cut-off.  It has a large P10 mirror that wraps around to white tip.  The P9 mirror blends with P10 and then it has small white tips to the primaries 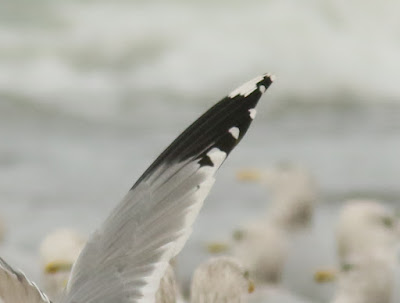 Herring gull is intermediate between California and Thayer's in terms of how the gray extends into the black.

The bird is about 2/3 of the way between Ring-billed and Herring in size. 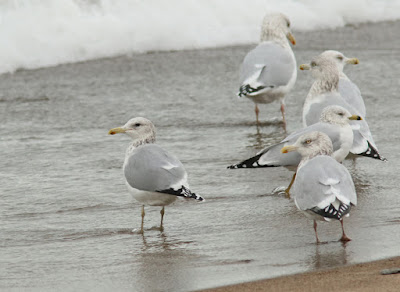 Another look at the body size comparison between the CAGU and the RBGU as well as between the head shape of the HERG and the CAGU. 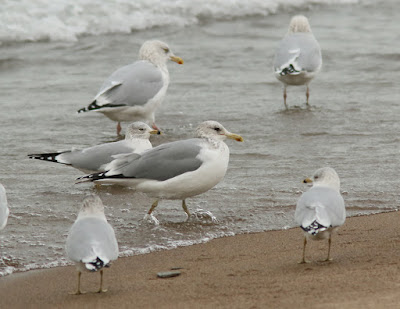 There were a lot of other gulls there, highlighted by 2 young Glaucous Gulls, and 3 different flavors of black-backed if you include Gull-nasty.
Posted by Matt at 3:37 PM

The University of Tiscornia said...

Last I counted Berrien had 21+ California Gull records (but I might have been counting birds like this:http://www.pbase.com/andre_moncrieff/image/143199140 that were later rejected by the committee)