I haven't gotten out to the beach very much lately so it was fun to see a kittiwake this morning.  I picked the bird up in the bins giving a vague hooded impression with an odd flight style.  The wings are proportionately long and coupled with the paler outer wing and a somewhat whippier wingbeat reminiscent of a medium sized tern the flight was very different from the Ring-billed that it roughly approximates in size impression. 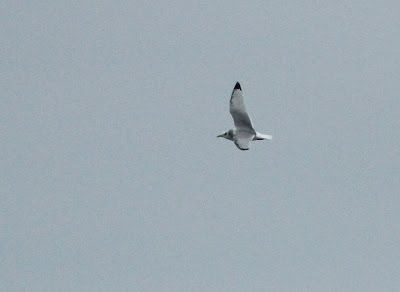 When the bird flew past originally I was atop the dune and it was a quarter mile out.  It headed out past the end of the pier, but then hooked back and settled onto the water.  It was at that point I got to demonstrate to myself just how out of shape I am when I ran down to the car to grab the bread bag and then alternated jogging with triple-timed walking out to the end.  Based on GoogleMaps it's about 600 yards in a straight line over the water from the overlook to the white lighhouse.  That turns into half a mile of actual land to cover.  The bird ultimately ignored the bread but it was at least a lot closer when it did take off to go south. 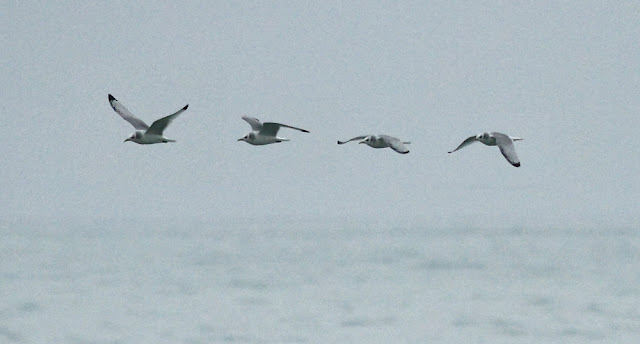 The bird has the adult "dipped in ink" primary tips, but also some black along the leading edge of the wing retained from the juvenile Kittiwake plumage (with the heavy black M) making it a 2nd winter bird.  It has the adult gray (rather than black) nape.  In the overcast light the outerwing was noticeably brighter than the gray innerwing.

The overcast made it difficult to get great shots.  To compare the new camera with the old here's the bird from the overlook today over the river.  Not great, but probably ID-able. 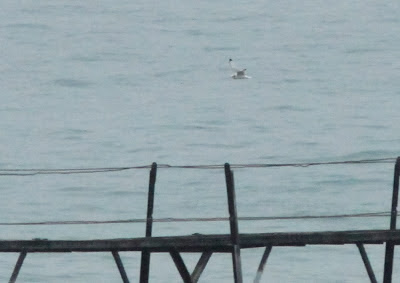 Here's an adult Kittwake from a couple years ago at a similar distance (though sunny glare-y) light and probably much more wind distortion, probably not really an apples to apples comparison, but still: 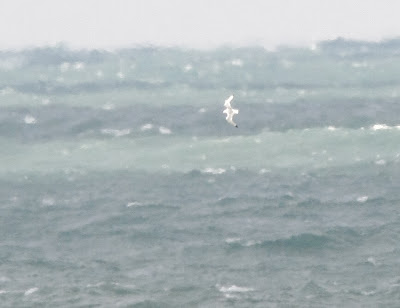 I'm guessing this is probably the last year-bird of the year, though I'm still missing a couple potentially gettable owls depending on motivation levels.
Posted by Matt at 7:04 PM