There's a handful of relatively rare birds I've never seen in Michigan, though that I certainly expect to encounter eventually. One of these is Red Phalarope. Tim and I found 2 individuals well off shore earlier this week in the boat.
The birds are first fall birds moulting into winter plumage. This one retains some of the buffy coloring to the throat and face. 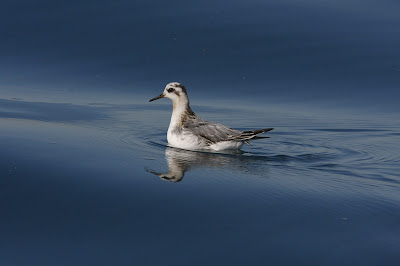 There is a difference in the underwing whiteness reported between Red and Red-necked Phalarope with Red being whiter. To me the flight style of the noticeably heavier Red was more distinctive to my eyes at least. 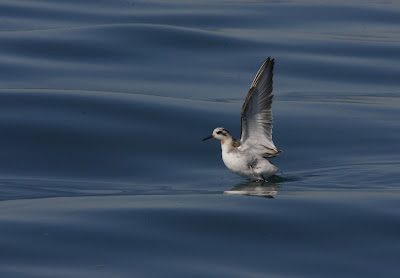 Note that the above bird is moulting its entire tail.
The other individual retained a lot less buffy in the throat and has less black in the cap. 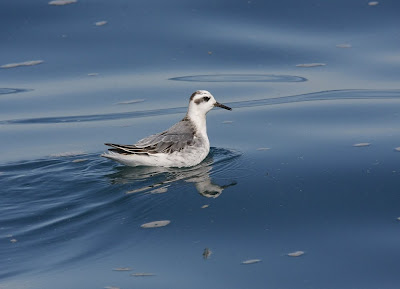 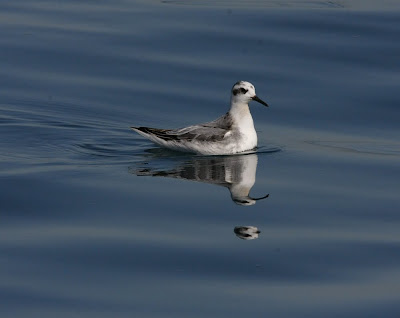 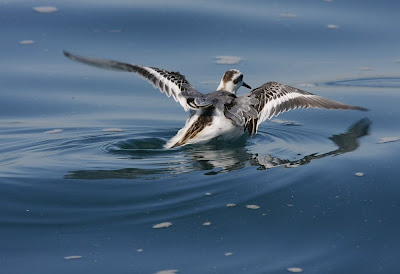 The bird didn't exactly land gracefully. Here it's rolled its body past 90 degrees as it dives for some prospective appearing foam. 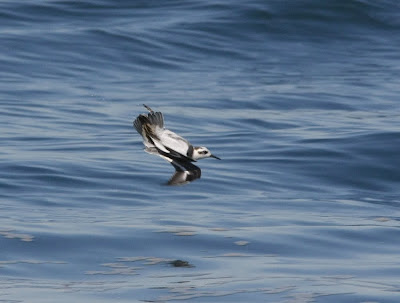 It would land by bouncing its breast into the water and skidding to a stop a la the murrelet. 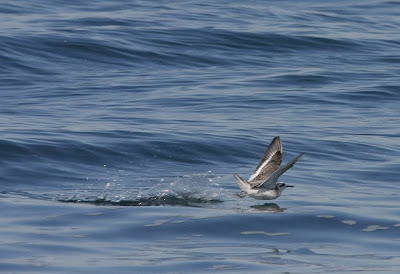 At one point the bird landed amidst some Bonaparte's Gulls and Common Terns that were resting on the water. One of the Terns chased/followed it about for quite a while through the air. 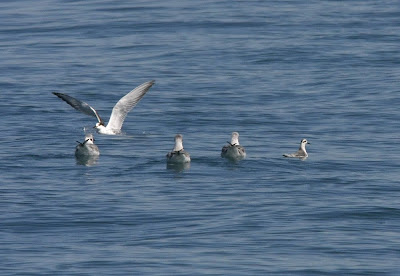 Here's the previous posts from this fall if you want to compare the body and bill shape to Red-necked Phalaropes and Wilson's Phalaropes
Posted by Matt at 2:56 PM

What type of boat did you guys get?

Awesome post and photos. How far out did you have to go to find these?
I'm not sure if this is related, but I flew directly over Tiscornia on a flight to Michigan earlier this week and could see a plume of different colored water that was reaching out like fingers a couple of miles into the lake. Presumably this was from the river mouth at Tiscornia (either sediment laden or a temperature difference?). It reminded me of the drastic differences in color that you see when the water temperature drops off in the ocean.

Awesome. Could you post sometime summarizing the effort you've put in offshore, and your strategy if any for finding stuff like this?