and I do mean distant. 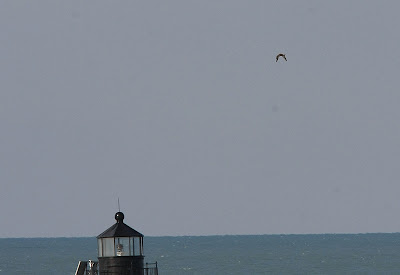 This jaeger appeared in front of me at Tiscornia attacking a gull. It gave up its press fairly quickly and flew past us. In the scope it was obviously different from the typical Parasitic's we see. It had a cream-colored head, as well as darkly barred axillaries with white ground color, rather than the warm brown that Parasitic typically exhibits. The flanks were much paler than the axillaries; Parasitic's flanks are usually similarly toned to the axillaries.
I started shooting pics, missing it flare its blunt tail for Tim and had my settings all wrong to boot (the sun had just come out), and by the time I had them adjusted properly, the bird was to the light house.
This is a zoom of the above shot. You can get a sense of the dark bill tip on the zoomed in view. They say in Olsen and Larssen that if you can see the dark tip at over 200m then you likely have a Pomarine. The bird's at about 600 yards here. The double white wing flash on the underside is visible here. Parasitics can sometimes have a suggestion of this, but not generally as prominent as here. 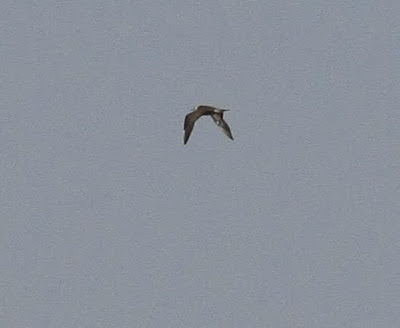 Pomarine is supposed to be more belly heavy than Parasitic. It's hard to say for sure on these pics, and honestly half my shots of Parasitic look belly more than breast heavy. The bird is far enough away that the dark brown on whitish barring gets averaged out to just lighter brown in these images... 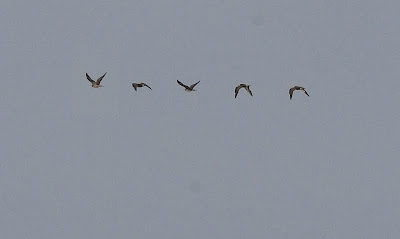 I doubt these pics are diagnostic, especially given that it's a lighter bird than most juvenile Pomarines are supposed to be. (Here's likely a similar bird from Brandon Holden's site photographed on Lake Ontario). It's easy to forget that a bird at 60x through the scope in nice light is still pretty far away. This is about the 30th jaeger that Tim's had this fall, and somewhere in low double digits for me.
Posted by Matt at 7:48 PM