With the fall waterbird migration due to start accelerating hopefully my schedule will allow me to get out a little more. Now's probably a good time to squeeze in one more book review: 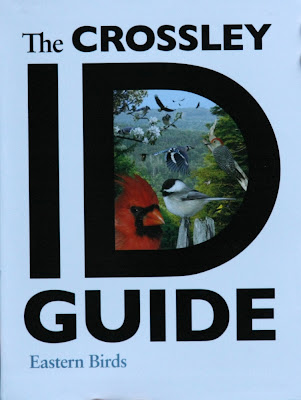 I have to admit, my first impression flipping through this book was "wow." There are a ton of high quality photos. My next thought was disappointment that the book only covered Eastern birds. As I flipped farther through, while the coverage map shows a Peterson-like definition of the Eastern U.S., the book really covers any place north of Arizona/New Mexico and east of the Rocky Mountains. Black Rosy-finch and Timberline Sparrow are probably the first Westerners to get dropped, though a lot of more western birds with regular vagrancy potential (e.g. Lewis's Woodpecker, Varied Thrush, etc) and even a good number of the Rio Grande rarities (e.g. Crimson-collared Grosbeak, Varied Bunting) are included as well. I think every bird on the Michigan checklist (including White-collared Swift!) is included.
The plates are photo essays of various images photo-shopped together. Here's the book fully opened to the teal (again don't take my photo of the photo as representative of the photo quality, this is to show the lay-out). 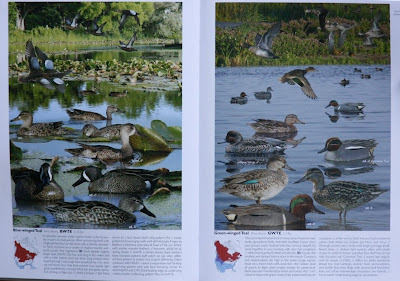 Crossley has attempted to depict the birds in usual postures in their habitat. My wife was particularly impressed by this, saying that this book would have been very helpful when she was starting out before she realized how tied down a bird was to its habitat. Some of these are really excellent, for example the Nelson's sparrow is in exactly one of the grasses we have found them in here in Berrien. Similarly the Common Goldeneye, Common Merg, and Bufflehead plate could just as easily have been taken at Tiscornia. The Phoebe plate could be a pic of my in-laws garden where they nest. Usually the backgrounds complement the pictures; there's some light-houses behind some and even a rainbow behind frozen Niagara for the Glaucous Gull. Occasionally the backgrounds can be distracting however (the phoebe plate for example has a random gentleman looking at the camera - unless that's the author's father I would have photo-shopped him out). I'm not sure I would have put the Ovenbird in a shady backyard or the Orchard Oriole in suburbia, but this may just reflect differences between New Jersey and Michigan, and for every plate where a person might quibble somewhat, there's many more that really look bang-on for habitat.
The descriptions are short but generally good, including some pearls on finding Saw-whets or fall Connecticuts that I've not seen published before. They tend to be informal (describing anis as having a "whacking" big bill) though sometimes a bit over the top (do I need to read that a Swallow-tailed Kite could fit in the movie Avatar?). I think my reviewer when I was writing ID features for MBNH would have objected to me saying that Indigo Buntings "lack any purple tones," or that Eastern Meadowlarks "rarely" form roadside flocks in winter. In my experience, Indigo Buntings in some lights can have purple head gloss and if the roadsides are the only areas that have some exposed grass, then that's where the meadowlarks will gather (and I've made efforts to photograph the spread tail on these to try to make sure I'm not missing Westerns).
The Photo-shopping is generally very good, though initially when I was looking at the plates it took a little getting used to seeing birds in focus in multiple focal planes. Crossley writes in his intro that he tries to show all or nearly all plumages of a bird and indeed, there is a transitional plumage of late summer/early fall Black Tern that I hadn't seen photos of before. That being said, this book won't replace Sibley since there are plumages that aren't covered well. For example, there's an excellent photo of a juvenile Gull-billed Tern that led me to look over to the next plate, Sandwich Tern, to see what its juvie looks like. There isn't one pictured. Similarly, for Little Gull, there's no juvenile illustrated, and only a couple very distant shots of a full adult. Granted, sub-adults are what we encounter most frequently at Tiscornia, but I have seen both full juvie and full adult there as well.
I think I would have taken a somewhat different tack for the flight shots of the ducks. They really blend into the background. Crossley explains that he feels this is how things appear in real life. I would disagree. You generally see ducks flying either against the sky, or against the water. They don't spend a ton of time flying at an altitude with trees directly behind them, and if they are, then they're close enough to see well. I would have put more of the duck flight shots wing-on with a cleaner background. I like what he's done with shorebird flight shots, frequently the flock shape is pictured; these generally jive well with my experience of them, though I don't usually see 5 sanderling lined up perfectly in a row. I would have included more pics of the grassland birds, especially the Ammodramid sparrows, flying away. Some of this may have to do with the fact that the overwhelming majority of the (10,000??!!) images in the book are the author's own, very few are the work of other photographers. Soliciting a few more photos of specific species could have been helpful, to my eyes the 3 images of Baird's Sparrow are of the same individual.
In the frontpiece is about 14 pages of thumbnail sized pics of the regularly occurring birds that indexes to the full plates. A lot of these pics could have stood to be brightened.
Overall, though, this is an excellent and fun book. It is likely too big to be a field guide though. I think Crossley also could have departed slightly more often than he does from phylogenetic order to put more similar species together. He already departs from phylogenetic order since the rarities are grouped 2 or 4 to a page rather than having a full plate. Why not then make other subtle tweaks like re-ordering the swans to put Tundra and Trumpeter facing each other, move the mergansers to allow the eiders to face each other, etc?
I think that the person who will most benefit from it is a birder who is past the beginning stages who wants to look at a book at night to improve his/her pattern recognition; having the habitats behind the bird will certainly help this process to put a bird into context. There is, though, something for everyone. I would, for example, ask that whichever of the bird committee members who objected to my description of a putative Ross's goose's bill base as "irregularly vertical" to describe the close-up of the bird in the lower left hand corner. 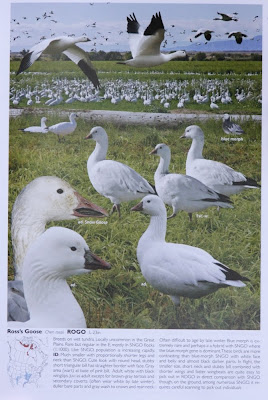 I certainly enjoy flipping through the pages and if Crossley can help inspire my kids to pick up the hobby this book will be a real coup. Five-year-old Hazel immediately wanted to color some of the birds on the page I was looking at (and it isn't even a really super-colorful page either), but here's her interpretation of the Connecticut Warbler (I drew the outline for her): 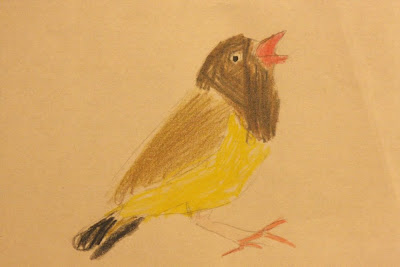 A challenge for photographers would be to flip through their folders and see how many birds they could put together a plate for, might be fun to try on some cold February night...
Posted by Matt at 7:12 PM