According to my spreadsheets, today is the 100th day this year I've visited Tiscornia, and it was a pretty exciting visit. Fall low pressure systems commonly pull Cave Swallows out of their post breeding dispersal from the plains well into the midwest, and we weren't surprised that the current powerful one is producing them. We thought our best chance might be after the winds settle somewhat later in the week. I had 3 appear in front of me not long after I arrived, on me as naked eye birds before I was ready. All I could see were buffy throats that bled into the breast through bins. About an hour later 2 more birds appeared. These 2 we picked up well to the north and tracked them as they came past. I knew after experiments earlier this summer that you have to manual focus swallows as they're too small and fast for the autofocus, but I didn't listen so my pics are poor at best. I think the left bird is identifiable. Tim manual focused and got sharp images. 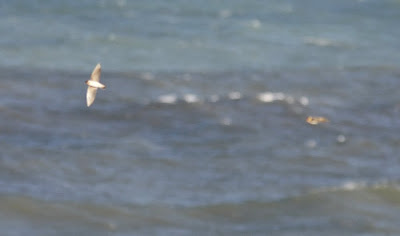 It was somewhat of a strange day. Cave swallows are more typically November birds in Michigan. This Short-eared Owl was the only real typical October bird. 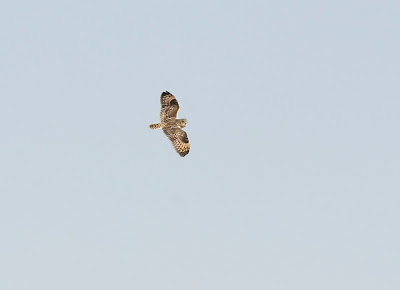 The rest of the migration felt like September. The bulk of the ducks were teal and dabblers; blue-winged's usually peak around Labor Day but they were the most common duck today. We also had 10 shorebird species including things like Baird's that's usually much earlier. A golden plover was my 3rd yearbird of the morning. 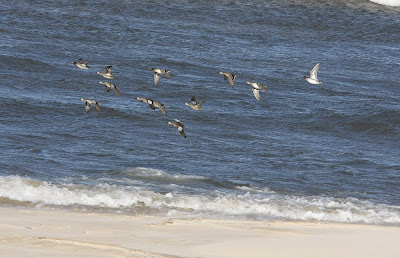 I'd like to know what the trail high duck is behind this group of redhead and canvasback. 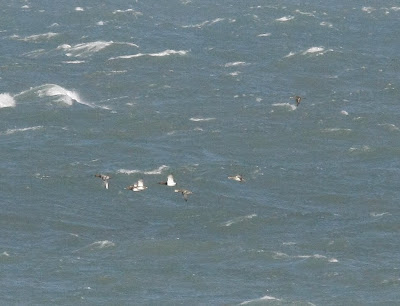 Surf scoter would be more likely than harlequin duck, but the bird's size in comparison to the redheads makes me think twice. 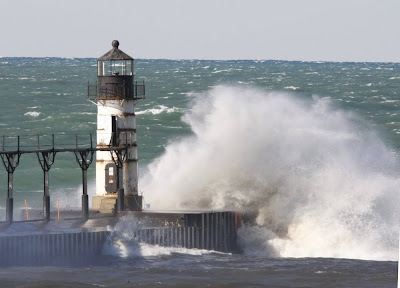 Let's just say it was windy.

The trailing bird kinda looks like a grebe to me, possibly a HOGR?

I'm goiing Cave Swallow-"ing" this weekend at Lake Erie :-)It's been a couple three years since I've seen one there

I don't know that I really considered HOGR as it seemed pretty dark overall, but maybe the darkness was a lighting aberration. I agree though that you do somewhat get a sense of trailing feet, and size would probably be about right.