The kinglet may have escaped the other day. This Winter Wren didn't.

A couple of the last few times I've been to Tiscornia the Merlin has been sitting up in its snag eating a passerine. I drove around this morning to use the car as a blind so that I could get some pics in the early morning light. The headless passerine appears to be a small brown bird with a short tail and some barring to the wings/flanks, I thought house wren initially but Tim pointed out Winter would be far more likely and looking at the pics full size on the computer I agree. 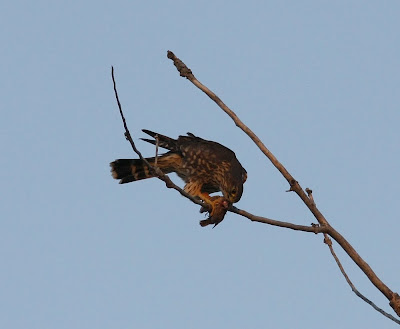 Falcons tend to pluck their prey... 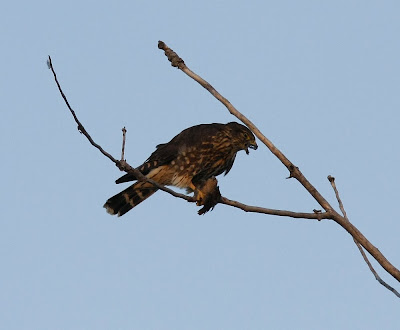 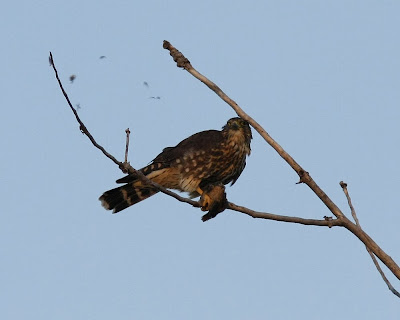 ... the feathers flew off in the stiff West breeze.

Sometimes it didn't have it anchored in its feet quite strongly enough, tugging it out of its own grip. It seemed odd to watch a raptor holding prey in its mouth. 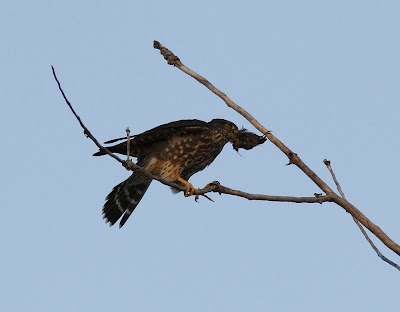 I think this is probably a juvenile male based on the dorsal view (which I should have put up instead of this last photo) showing a bluish tinge to the upper back and that the tail bands on the upper tail are grayish, but per Pyle not all are age- and sex-able in fall. Wheeler wasn't terribly helpful in discriminating either. 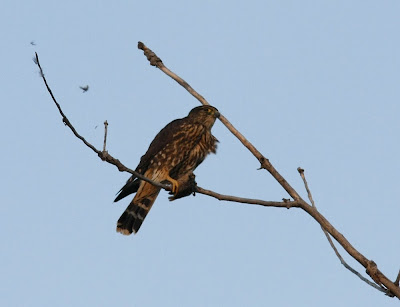 Most years peregrines are much more likely to hang around Tiscornia, but this year they haven't been; perhaps that's why the merlin is sticking. The one-legged Piping Plover that's been hanging out a township to the south after originally being found in New Buffalo had better not come back any farther north...