It can't be winter yet

Gentle south winds actually made today the warmest day I've been outside in a couple weeks. Despite the shirt-sleeves weather, the birds however, had a definitely late fall feel to them.

This first year glaucous gull was on the beach at New Buffalo. 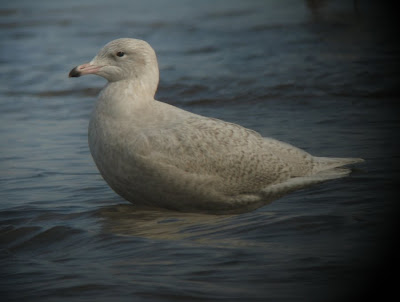 Based on the relatively short bill it's probably a female. 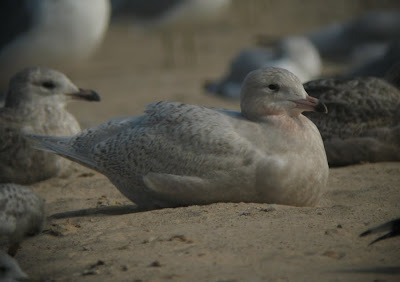 This was definitely the earliest that I've seen one; more plumage detail was visible than in their usual faded appearance. This one had a blush of pink about the cheeks and throat. I didn't make up my mind whether it was a stain or actual pigment.
This herring gull drew our eyes too. 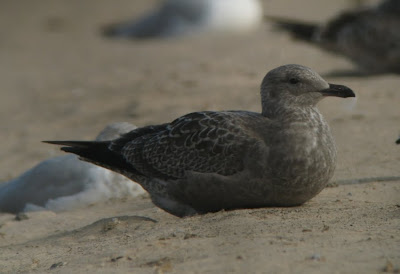 They're not usually dark and crisp this late in fall, unlike Thayer's or Lesser Black-backed. We wondered if it was a late bird whose parents first breeding attempt failed.
I could continue with the late fall/early winter theme with more white-cheeked geese from Three Oaks today, but I'm going to work up to that slowly and pass for now.
INSTEAD, here's a shot of a bird that's becoming a bigger oddity. There's been a greater black-backed looking thing at Warren Dunes off and on for the last 2-3 years with light yellow legs. It doesn't look quite right, but I've always called it a weird Greater Blackback. Tim, however, recently photographed it at Tiscornia with what appears to be way too much head streaking to be a Greater. We haven't figured out what it is. Various hybrid origins have been proposed but have to account for a bird somewhat bigger than all the herring gulls, with a decidedly black back (most F1 hybrids of Kelp/graelsii x Herring gulls have intermediate backs, though there is one photo in the Howell and Dunn guide of a presumed glaucous x greater black backed with a very black back), yellow legs and an orangish orbital ring (both black-backed and kelp gulls have red orbital rings, herring orangish-yellow). Here's probably the same bird from last year at Tiscornia; I didn't notice the yellow legs at the time. Tim's pics are here. The head streaking as it's acquiring winter plumage is bizarre. Lesser black-backed gull x Herring could explain the legs but not the size or back color. Kelp gull x Herring could definitely explain the back color (especially if an F2 Chandeleur Islands bird) and maybe the leg color, but not the size. Greater black-backed x Herring would be perfect for size but still crosses 2 birds with pink legs. 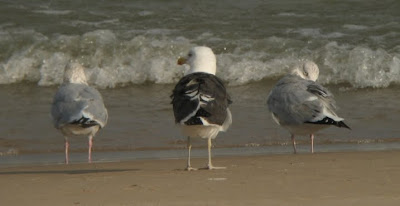 Here's a lousy pic from 2 cameras ago from Niagara of a Greater Black-backed that stood out to me as having yellower legs than the other 6 that were on the same breakwall. 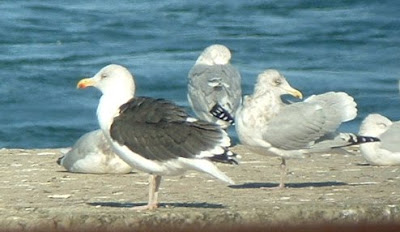