We've all been there. You see a bird briefly, can't get a solid confirmatory view (much less a photograph), and end up with a big one that got away. Tim and I were walking the grass at Tiscornia and walked up on a sandy pale passerine walking away from us with a fairly upright posture, a contrastingly patterned back, and (what seemed to be) a plain face. It was 15 feet from me and probably less than 10 from Tim and disappeared into the grass in seconds. We had a rope with us (with which we'd been dragging other sections of grass), extended it across the grass island in the parking lot and walked to the end ... nothing. No Sprague's pipit flushed or walked into view, nor anything else, either. Though both of use believed Sprague's pipit is exactly what it was. Oh well.

Tim picked up a road-killed Barred Owl from near his house which is probably in decent enough condition to end up in the Andrews collection. 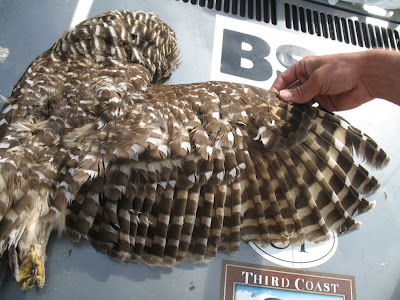 The pattern of the primary coverts is (per Pyle) supposedly helpful in aging them. We came to the conclusion that this was probably an adult, though the difference didn't seem to be as great as in the book's figure. 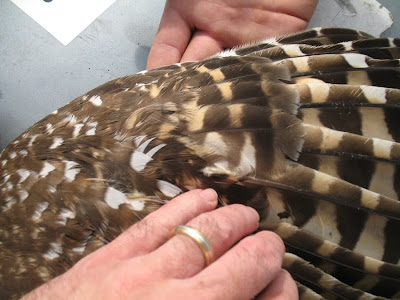 Here's the bill. The facial feathering projects so far forward in owls that you don't see much of the bill. 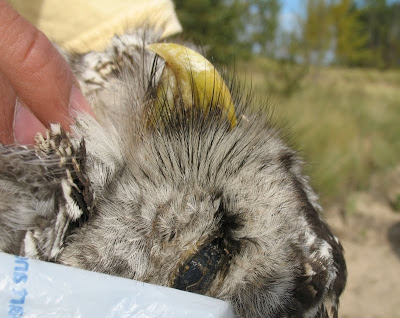 On slightly less macabre topics, this is a Variagated Fritillary. Per Kaufman, the dark bracketed paler spot on the leading edge of the forewing a little less than halfway out is a pretty good mark for this species. 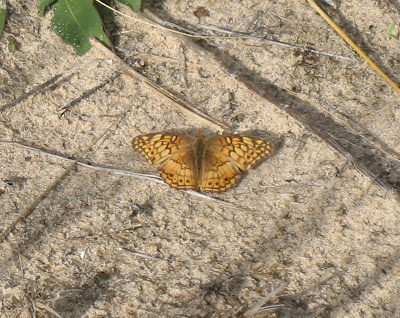