A change of pace

Presenting, a new feature to this blog, Book Reviews! In a new marketing device, Princeton Press is sending free copies of some of their books to bloggers with the agreement we'll review them. I'll leave it for you to decide if that has affected my objectivity. That being said, I think that Liguori's Hawks at a Distance is an excellent book. 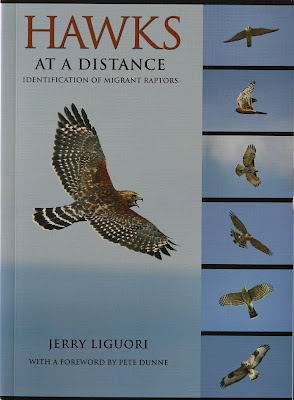 The introduction is well done overall, I think that one of his primary points is to emphasize shape rather than exact plumage marks since he points out that it's easy to get hung up in minutiae and apply field marks to ages or color morphs to which they do not apply. One of the follow-up concepts is to spend more time watching the bird with bins and less time with the scope. In the introduction I would have been more specific in the photography sub-section about how settings need to be tweaked for photography of distant raptors. Specifically, an image needs to be over-exposed to avoid the camera's computer from reducing the image to a black dot on a pretty medium blue field. Doing this requires some combination of increasing the ISO, reducing shutter speed, and lowering the F stop (the trade-offs of these being increased graininess, possibly decreased clarity, and decreased depth of field respectively).
The species focused upon are migrants, generally those expected regularly (or at least annually) at Eastern hawkwatches. Therefore, the species with full accounts are the 3 accipiters; the common Eastern buteos plus regular rarities Swainson's and Ferruginous; Harrier; the 3 common falcons plus Prairie; as well as Osprey, the 2 eagles and the 2 vultures. Gyrfalcon, Mississippi Kite, and California Condor (!) are treated more briefly with even briefer discussions of Short-tailed Hawk, Zone-tailed Hawk, White-tailed Hawk, White-tailed and Hook-billed Kite, and Caracara. Personally I would have liked a little more info on Short-tailed Hawk. If you're going to include Zone-tailed Hawk and Condor I'm not sure why you wouldn't throw in a little bit on Black-hawks as well. Since this book focuses on birds encountered at hawkwatches, I probably would have added additional shots of Short-eared Owl (there's one along with 2 Hawk Owl shots).
There are no illustrations of perched hawks.
The full-frame eye-candy shots that lead each section range from decent to stunning. Ironically while an excellent shot of Red-shouldered is the cover bird, the Red-shouldered image that leads the species account is to me clearly the weakest of this format. I was disappointed when I reached the Gyrfalcon section to find it missing the lead-off portrait like the swooping immature Goshawk or dramatic young Swainson's that lead their respective accounts.
The (usually) one page section of prose describing each species is well written and is far closer to the conversational style of Pete Dunne in the classic "Hawks in Flight" than the highly dry, densely technical flavor of Wheeler's "Raptors." It comes pre-highlighted with key points in bold. I found it interesting that he bold-faces (on page 25) that "the underside plumage is often not useful in identifying distant juvenile accipiters." Dunne, in Hawks in Flight (page 72) italicizes that "if an immature accipiter appears white below, it can safely be called a Cooper's" in his section summarizing accipiter separation.
The meat and potatoes of this book follow the one page description with plates featuring (usually) 6 photos per page of distant hawks in flight. Here's one of the 6 photos on one of the gyrfalcon plates (please don't take these photos I took of the photos to be illustrative of the photo quality in the book, rather examples of the style) that caught my eye as familiar: 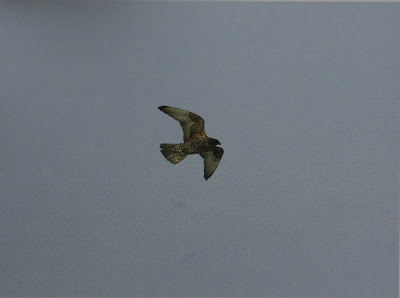 The same photo is used in Wheeler's "Raptors," cropped very differently (his book is laid out 4 photos to the page): 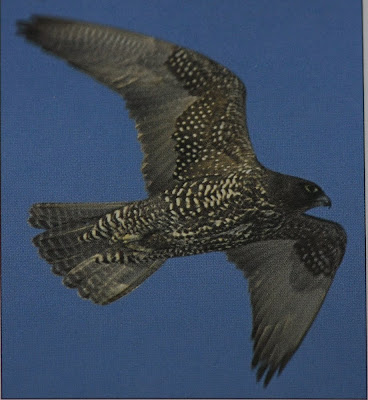 Ligouri emphasizes that he wants to show the photographs as you would see the birds in the field through binoculars so isn't showing close-up views. That being said, I would have cropped them in by at least 10-20%, but I tend to over-crop my photos. This was the only photo that stood out to me as looking familiar. Over 95% of the (~550) color photos are Ligouri's own. I haven't studied every species account, but did look over a couple of them fairly closely. I am not very familiar with Goshawk, having seen only about 4 birds flying by briefly so I studied those plates fairly closely. It does definitely give a sense of a different bird, with much broader secondaries than a Coop and a much shorter hand than a buteo; the proof will be this fall if one jumps out at me more quickly. The Red-tailed Hawk section is the longest (expectedly so with the number of subspecies). In this section there are 6 shots of Eastern, 23 of Western, 27 of Harlan's, 4 of Kriders, and 18 unidentified to subspecies. The number of un-ID'd birds goes along with a lot of the cautions in the text that a lot of distant birds need to be left as Redtails. Many of the un-ID'd photos make general points about the substantial effects of lighting, age, or both, on appearance.
The final section of the book contains montage plates of hawks cruising and soaring to and fro from different angles, here's the Swainson's plate, you can compare it to the Swainson's photos from this spring. 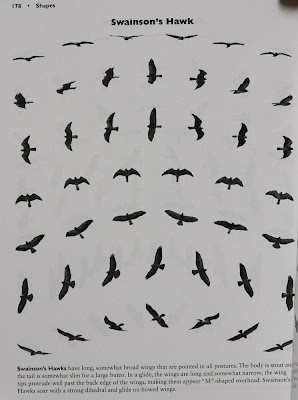 I like this section a lot, it allows close comparison of subtle differences in shape among age classes of a species and just a good gestault of the bird. I would have liked to have seen Mississippi Kite included as well though.
Overall, this is an excellent book. The technological improvements in photography and printing made since Hawks in Flight was written 20+years ago allows the photos of Liguori's Hawks at a Distance book to blow the doors off of those in Hawks in Flight (not that the classic isn't still a good read or that Sibley's illustrations aren't still superb). At about $20 with tax I think this book is well worth the money to someone looking to spend time at hawkwatches, or someone who has spent reasonable amounts of time, but would like to improve their ability to pull out one of the rarer species.
Want another opinion and some more info on the book? Here's what Cory Gregory wrote about the book.
Posted by Matt at 5:36 PM

Thanks for the shout out. I have a couple more book reviews in the making too! Good birding.