Currently there's a thread on ID-Frontiers about Ring-billed's with gray body plumage with some discussion about whether this is staining or if this is natural plumage.

These birds are reported most commonly around Chicago though it was a Georgia bird that started the discussion (here's one with a normal head but gray body from California). I had this bird in June of 2007 (at Tiscornia (in extreme SW Michigan for any visitors)). 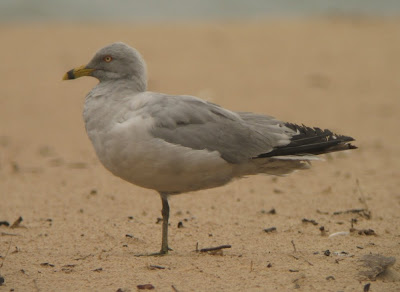 When I first put binoculars on it I immediately wondered if I had a Gray Gull, a bird native to South America (I think) which I only knew of, but nothing about its appearance. The scope however revealed a clear Ring-billed (though the orbital ring shows up much more prominently than it does on white birds). I've always thought this was a rare plumage variant. I find it hard to believe that a bird could be so evenly stained (wouldn't floating in water affect staining somewhat?). The bill and legs are somewhat darker than a typical Ring-billed's, I don't know if that's an argument either way. The white tip to newly growing P7 and the mirror on the underside of P10 appear to be normally white. The flight feathers on the Georgia birds also appear to be normal. I'm not sure that I could see a pollutant (even if the bird was dust bathing in coal dust with its wings extended) that would completely miss the wings, especially given that the wings would be the least rinsed off in swimming and bathing. To my eyes the mantle of my bird is essentially the same as that of the normal neighbor which also would seem to argue against artificial staining. But, who knows. The Chicago birds are mainly seen in the summer, same time as mine, so perhaps there is some exposure that leads to this that occurs during that time period.
Here's one from New Buffalo with the opposite... 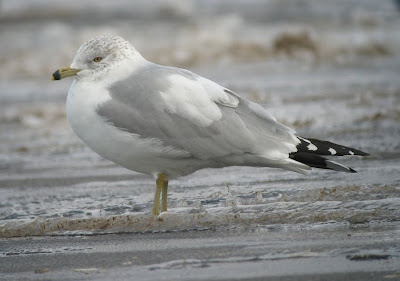 My notes from the day indicate that there was a symmetric patch on the other side.