that are now up to me! (insert evil mwa-ha-ha-ha laugh here).

With the turn of the year, Ross's Goose has completed its 3 year "probation period," maintaining regular occurance in the state and is now off the review list, transferring the headaches of what is and isn't a Ross's goose from the committee to the NAB and MBNH compilers.

Here's a review of my experiences with Ross's-type birds in Michigan.

First the "best" Ross's I've seen, a bird I found in Washtenaw in November of 2002 or so. It has a vertical bill base and the most blue wartiness to the bill of any I've encountered. It was accepted by a 6-1 vote. 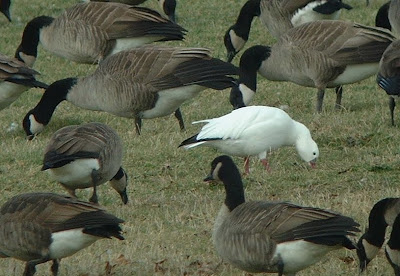 Next are 3 birds from Paw Paw Lake in March of 2006. The first pic shows what I took to be the female of the pair, the smaller of the 2 adults. It has a little more black along the tomia, what I would term a vertical or irregularly vertical bill base and some blue to the bill base. 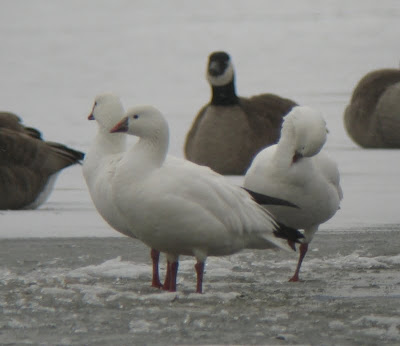 Next the slightly larger of the adults, I assume the male, whose bill is not quite as vertical. 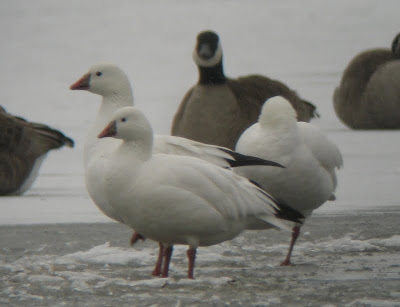 The first winter/first spring bird (with a little duskiness to the lore and some duskiness in the wing not visible in this pic) does have a more convex outward bill base, though I believe this is more allowable in first year birds (though I haven't yet come by a couple papers that apparently discuss this based on their title)... 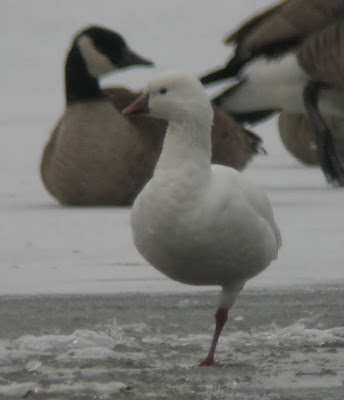 These birds were accepted 7-0, 7-0, and 6-1 (my assumption is that the 6-1 bird was the "male" though that's purely a guess - though if the assumption that this was a family group is correct then it's not possible for only one to have been a hybrid).

Now we move onto even shakier footing.

I submitted this bird from March of 09 as a Ross's. It went to a 2nd round of voting with the committee, based on the context from the meeting minutes (from July 09) probably entering with a 4-3 vote. The bill isn't quite as vertical as the first bird, though the bill is certainly much smaller than probably all but the first winter bird of the previous trio. The reported discussion of the bird by the committee ended with this gem of a statement: "All agreed that the distinction between hybrids and pure birds is a murky issue, with some birds hovering around what are certainly arbitrary standards for acceptance." 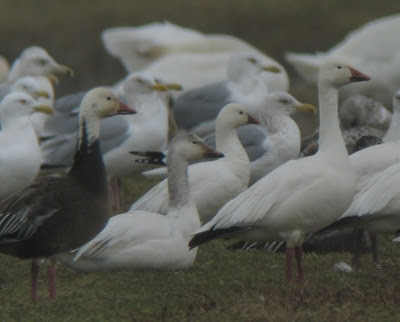 But, the committee's headaches didn't stop there, they continued with the flock Tim found from the same day:

Birds 6, 9, 10, 11, and 14 were apparently accepted on the first round of voting. The birds were really too distant to get solid pics and Tim and I never collated our pics to figure out which numbers some of the sub-group pics corresponded to. Ironically in the field I thought number 10 seemed a little bigger than the others, I thought all the others were within the limits of what most Ross's-types in Michigan look like. Apparently after the ensuing discussion (where some members were no longer sure they supported some of the original birds), the minutes reveal that the committee took a break.

Finally, here's a bird from Washtenaw that's a clear hybrid (there were 2 like this at a Galien farm pond in Berrien last spring) with an evenly convex outward bill base, though still with some blueness to the bill base. 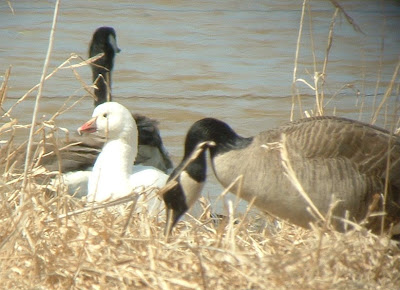 What to make of all this? Some birds, such as the last one, are obvious hybrids and are indeed intermediate between Ross's and Lesser Snow Geese. In my last Ross's post I mentioned how one paper (Trauger et al) and Pyle present similar measurements for hybrids and yet come to different conclusions, Trauger feeling that F1 hybrids can very much overlap "pure" Ross's and Pyle leaving a person with the feeling that they're more intermediate.
Before we get to that I think it's instructive to review the more studied Lesser Snow Goose over the last century. At the beginning of the 1900's the bird we now call the "Lesser" Snow Goose (the "Greater" subspecies breeds even higher in the arctic and winters on the east coast) was thought to be 2 species, the Blue Goose and the Snow Goose. Blue Goose wintered on the Louisiana coast and bred on Baffin Island and eastern Hudson Bay whereas Snow Geese wintered on the Texas coast and bred along western Hudson Bay. There was apparently only a narrow range of overlap in the wintering range. However, during the period of 1910-1930, rice farming exploded in Louisiana miles inland from the former wintering areas and opened up a big new foraging area attracting both color morphs. The ensuing decades found that blue-type geese steadily appeared in the western breeding areas and snow-type geese started appearing in the east. Cooke et al, 1975, describes that in smaller breeding colonies this process was accelerated, as up to 50% of the birds were born in different colonies from where they bred. The birds pair-bond for life on the wintering grounds during their 2nd winter, with females usually returning to their natal areas to breed with their mate following. (The young birds making their first trip north apparently mill about the edges of the breeding colony as non-breeders). The bottom line is that in a relatively short period of time a fairly significant change occurred across the Lesser Snow Goose population. (For more reading see Cooke et al, 1988, though it's a lot denser).
What of Ross's goose in this period? Well, a pretty tremendous population explosion occurred. One online reference suggests that the Ross's Goose population went from 2500 birds to about 1,000,000 birds over the last 60 years (though I have no idea where that figure is pulled from). We know that different populations of Snow Geese have been moving about in the last several decades. The birds pair up on the wintering grounds and Ross's Geese families are observed to be less able to stay together in a cohesive unit in the wintering grounds than Snow Geese according to Jonsson and Afton 2008. Trauger et al 1971, describes how years with late thaws leave the arctic nest sites at a premium leading Snow Geese to usurp the nests of Ross's Geese. Rather than going to the trouble of destroying the Ross's eggs and then having to remove them to a remote location to avoid attracting predators, they simply add their eggs to the nest and if Ross's goslings hatch they imprint on the Snows! Weckstein et al, 2002 also describes some degree of shared mitochondrial DNA between Lesser Snow and Ross's Geese in Louisiana.
I think it would be an interesting study to go through hunters' bags in Arkansas/Louisiana, New Mexico, and California and see what would shake out in terms of measurements of the birds and how they would compare with the studies done 30 and 40 years ago. My guess is that "Ross's Goose" in the east is a different bird now than it was a hundred years ago. As to whether the appearance of these birds in the east will stabilize or just continue to degenerate over the next decades will be interesting to see.
References:
Cooke, F, CD MacInnes, and JP Previtt. Gene flow between breeding populations of Lesser Snow Geese. Auk 92: 493-510. 1975.
Cooke, F, DT Parkin, and RF Rockwell. Evidence of Former Allopatry of the Two Color PHases of Lesser Snow Geese (Chen caerulescens caerulescens). Auk 105: 467-479. 1988.
Jonsson JE and AD Afton. Lesser Snow Geese and Ross's Geese from mixed flocks during winter but differ in family maintenance and social status. Wilson Journal 120 (4): 725-731. 2008.
Trauger, DL, A Dzubin, and JP Ryder. White Geese Intermediate between Ross's and Lesser Snow Geese. Auk 88: 856-875. 1971.
Weckstein JD, AD Afton, RM Zink, and RT Alisauskas. Hybridization and population subdivision within and between Ross's Geese and Lesser Snow Geese: A Molecular Perspective. Condor 104(2): 432:436. 2002
Posted by Matt at 6:42 PM