Tim called this morning (technically Saturday morning) with news of a Western Grebe at Tiscornia. Having seen one 3 weeks ago at New Buffalo I could afford the peace of mind that comes with a shower and careful observance of traffic ordinances. The bird was about 300 yards out when I got there, but would sometimes close to about half that distance. 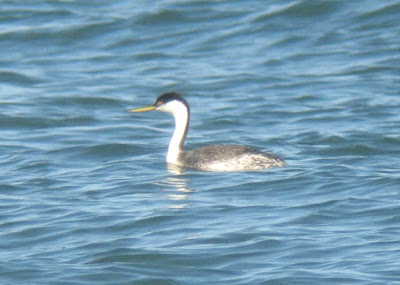 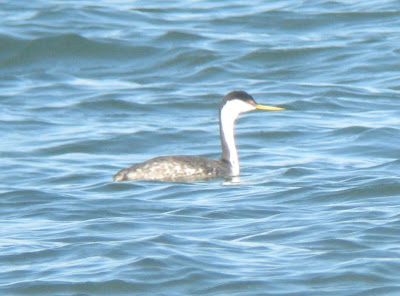 As detailed in my post earlier this month ("ask and thou shalt receive"), bill color is the best way to separate Western from Clark's per all references that I could locate.

And, as before, the color when the bird's bill is not in bright perpendicular sunlight is more accurate. In this case it's on the olive, rather than the orange side, of yellow.

This bird was also an example of how photographs (especially bad photographs) can be deceiving. 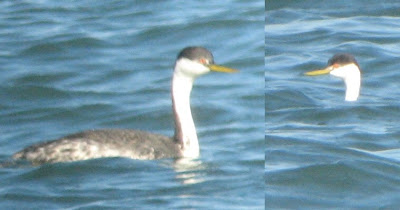 I was having trouble getting decent photos, and kept overexposing the bird. On pics with the bird way overexposed, with the focus in front of the bird, and the bill somewhat aimed towards us I totally blew away the thin black feathering under the eye and started lighting the lores up like headlights. Not good if you want the bird accepted sans slash (Western/Clarks in the official record). 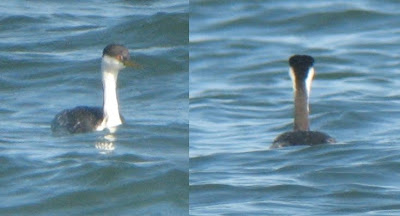 The leftward shot shows what the lores (and the flanks???) ought to look like with more proper exposure (note that Sibley does show non-breeding Western as having paler lores, the question is whether they're pale/medium gray, or if they're white). Again, the figures in the Storer and Nuechterlein article are worth a review. The nape seems to be a typical Western nape, though again, the nape is only really helpful if very narrow.
The addition of overwhelming probability makes me comfortable putting it into my township spreadsheets as a Western (and probably lets St Joseph pass Three Oaks for good after Three Oaks pulled back to a tie with the Arctic Tern yesterday), though I'd feel more confident about the bird not getting accepted with a slash if I hadn't come up with so many ugly pics of it. The lores were not white in the field though.