So the phone rang this morning. I could see Tim's cell on the caller ID. I picked up the phone expecting to hear about a cave swallow. I heard a pressured voice, "You gotta get down here." Ok, still expecting a cave swallow. "There's an Ancient Murrelet at Tiscornia. It's three feet from the beach." I hung up on him and ran for my scope. I had expected Tim to eventually get this bird, but I had always expected that he would have seen it flying past and the bird would be halfway to Indiana before I'd even had a chance to set out.

It was a lifer for me (as well as for many of the people who arrived), and good enough to stick around, swimming up and down the pier foraging on the minnows that had attracted decent numbers of steelhead. It would swim far out and rest for a while before swimming (and once flying) back in. 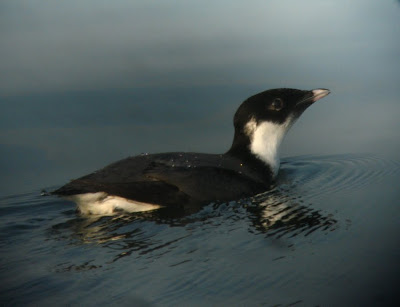 It was close enough to be noted by the fisherman, some of whom claimed to have seen it earlier this week. One of them insisted the bird was a grebe, "and I know grebes." One of the birders (Rick?) deadpanned, "well, that was a trip wasted then." 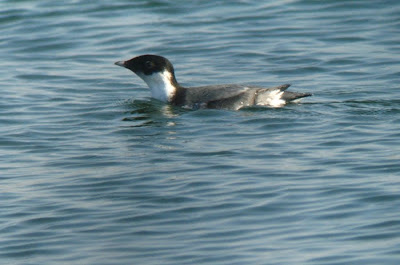 The birders arrived in waves, first from Grand Rapids (and Indiana), then from Jackson, then from the SE part of the state including good numbers of my old friends from Washtenaw. It was even a state bird for Tex Wells. 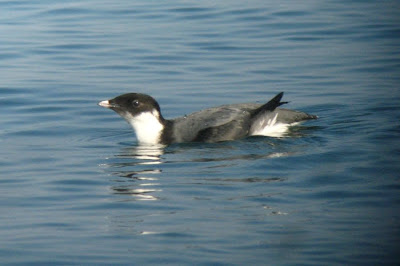 Based on the narrow black line that connects the ear to the nape, I suspect this bird is a non-breeding adult since in breeding plumage that entire area is black; in full non-breeding plumage and juvenile plumage the black line doesn't exist, so my guess is that's retained from this summer. I don't have a waterbird Pyle though.
Here's a view of the bird as it's just starting to dive... 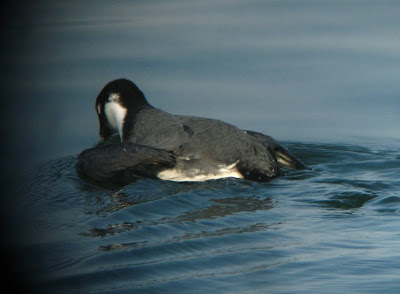 And the bird as it's diving, a commonly recorded image by the congregation of birders who accumulated thanks to the wonders of cell phones and the internet. 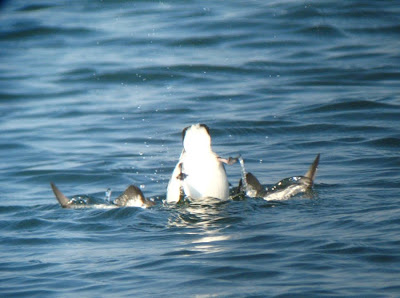 The other thing I learned today was that with an Ancient Murrelet to watch, a cough drop makes a good lunch.