According to one of my references (that I may have pulled off the shelf for the first time ever), Leahy's The Birdwatcher's Companion, a bird encyclopedia printed on newsprint, the origins of the name have been lost. I wonder if it's something similar to the Wheatear's, a bird known originally as "white arse" in Old English, but which slowly morphed over the centuries to a name both more, and less, appropriate.

Anyway, there were two of them on Tiscornia Beach this morning. Both birds retain a little of the chestnut on the breast and upper belly so are adult birds moulting into winter plumage. I'm not sure I've ever seen a juvenile avocet in Michigan. 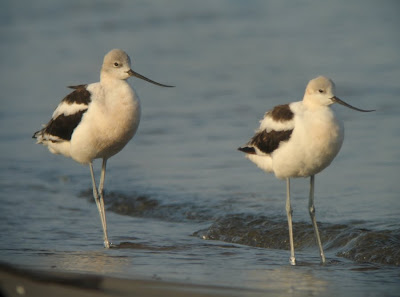 The male is on the left, the female (also below) on the right. Females generally have more upturned bills than the male, though per Karlson they sometimes can be hard to sex. I'd never really noticed the grayer tertials, if I were to have colored a picture of one without a reference I'd have just colored those feathers black as well. 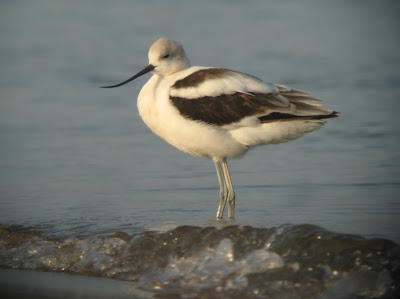 Here's how they looked when I first spotted them from the base of the pier after a Cooper's Hawk flushed the gulls off the beach. I had to make a wide circle around them to get the light at my back.

Thanks for the call Matt - Berrien year bird! I don't think I've ever gotten Hudsonian & Marbled Godwits & Whimbrel before I've gotten AMAV; I was wondering if I was going to miss it.