I haven't had much luck lately obtaining blogable images. Tim and I had a couple little gulls sit down briefly on the beach a few weeks ago but they left quickly. I haven't been working for the passerines I still need this year; mainly I've been going to the beach when I can go birding hoping for a long-tailed jaeger (which have been seen with some regularity of late in southernmost Lake Michigan ... Indiana's Lake Michigan).

This morning Tim and I counted at Tiscornia as part of an organized lakewatch. There was a steady movement of blue-winged teal, we probably had 500-600 or so, mostly well out. The best bird was a merlin which Tim picked up harrying a passerine well out over the lake. Despite multiple passes the smaller bird evaded capture by dodging sideways and gaining altitude. The altitude gain was key, exhausted birds that just beeline for the shore with only lateral movement seem to get snagged. Eventually the merlin either gave up or lost it and flew straight in, perching up in the snags more commonly occupied by peregrines. Ironically the passerine (Tim thought a Tennessee warbler) flew over our heads as well and could have been re-targeted by the raptor which had easily beaten it to shore. The merlin's wings seemed fairly uniformly colored without any retained faded old feathers so it was probably a first fall bird. 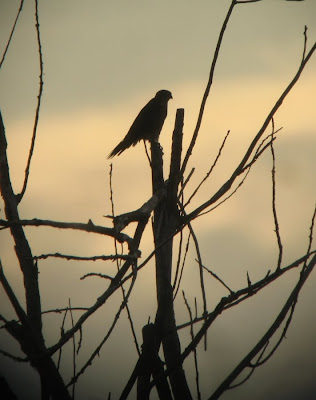 The early morning clouds made a nice composure but don't give much detail on the bird.

Here's a little better detail from a female bird in Washtenaw, I'm guessing about February of 2005 or 2006. 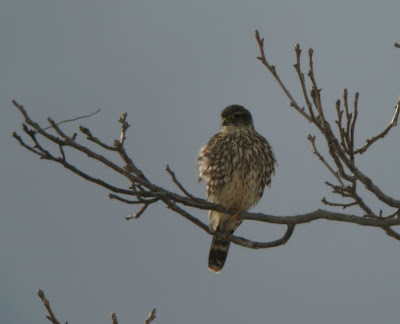 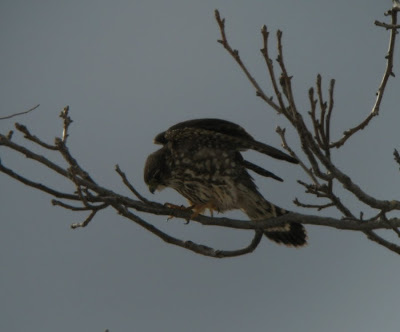 Per my Wheeler hawk book once the wing moult is completed it's very hard to age female merlins in winter.