The willet before the storm

I biked out to Tiscornia yesterday morning at dawn with storm clouds from the west racing the sun to cover the eastern horizon. The storm clouds won; despite clear sky above me as I started out, the sun managed only a faint pink flush on the lighthouses before the overcast (with distant thunder) won out.

There were more gulls on the beach than there have been, including my first juvie Bonapartes of the fall. One of th 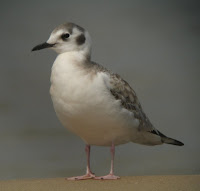 e juvie ring-billed's was pecking away at a tennis ball, seeming sure that there would be a juicy reward for its efforts besides a stomach full of fuzz. A tern flew across well out which I initially took to be a black tern through binoculars but was instead a bird in the medium tern class through the scope. However, it did indeed appear to have a gray body and throat with a contrasting white cheek patch. The outer 1 or 2 primaries were black with a thin trailing edge of black along the primaries. It seemed like it was most likely an arctic tern, but having no experience with them, I didn't feel I could be positive under the darkening light conditions (though I've never seen a Forster's or common look like that). I think it's going to be a big one that got away.

At any rate, I was trying to decided when to bail with a storm approaching; it seemed like it was getting darker rather than lighter, the thunder seemed to be slowly getting closer. A willet eventually convinced me, flying through the scope parallel to the shore south past the piers. Given that I need it for the Bigby year I decided to bail right then and there lest I need rescue and not be able to count the bird. I nearly made it home dry, but at about 3/4 of a mile on the final rise it just started dumping rain and I got pretty wet (guess I shouldn't have stopped at a bakery on the way home).

Storm lines kept coming through the day, culminating in what I understand were 70-80 mph winds coming off the lake in New Buffalo last night (THAT would have been interesting to see) and the tern was never re-found. Hopefully I can get back out on Saturday and get in a decent lakewatch; it's supposed to be cooler, hopefully that will mean NW winds...
Posted by Matt at 7:30 PM