I spent some time at the beach yesterday morning (more later) and found the gull flock to be fairly cooperative.  Some days they're very skittish, other days much more tolerant (perhaps having to do with how many times they've already been flushed by dogwalkers).  Though there weren't tons and tons of birds, all age groups of herring gulls were represented so I spent some time photographing them given that there was very little movement of migrants.
First is a juvie, they just appeared on the beach in the last month after leaving the breeding ground.  Note that the bill is dark throughout its length (though this one is already starting to get some pinkish at the base).  It's very brown overall, and wing coverts (which aren't really all that visible in this picture) are cleanly marked dark and white: Next is a second summer bird.  One of the best marks for this age class is the solidly bicolored bill, pink at the base with a dark tip.  Every now and then you'll find one which is still solidly brown in plumage, but they virtually always will show this bill pattern by now.  This age class has moulted the wing coverts which are more of a marbled brown rather than the more checkerboard pattern of the juveniles.  The primaries are solidly brown and this one's eye is starting to lighten.  Over the next month or so most of this age group will start attaining a gray mantle. 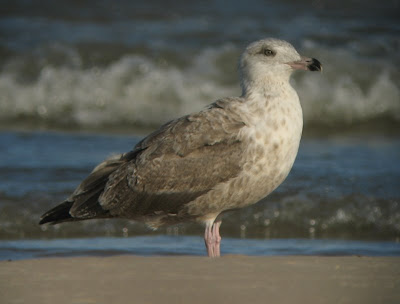 This is a 3rd summer bird, note that it is most of the way to adult-type plumage.  However, the bill pattern is still at an intermediate stage.  These have also moulted their wing coverts for the most part so in addition to the gray mantle, the feathers covering the wings are all gray now as well (you can just see a couple of remaining dark brown feathers in the lowest layer of coverts more prominent when the bird was more broadside).  This one has a legband; I don't know where banding studies are being carried out in the midwest. 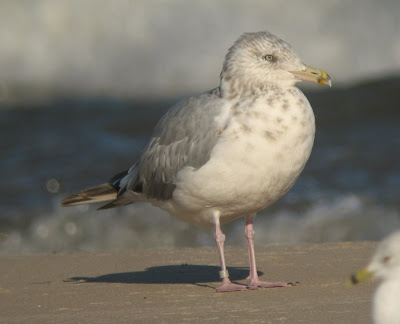 Finally we get to an adult bird with bright yellow eye and fully yellow bill with its reddish spot.  All the age classes are moulting their primaries right now as well which is better seen in September when some birds seem very long-winged and others very short-winged.  This bird is still in summer body plumage, most birds will get more brown-black markings on the head for winter. 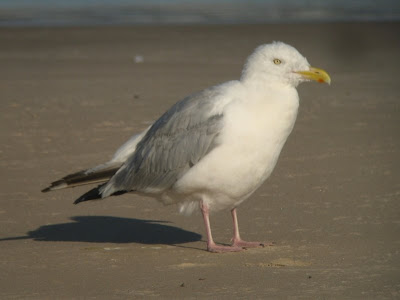