I blame the book

As we left the highlands and moved onto the Pacific side of the country we entered an area I've never been and a lot of birds I'd never seen.  You don't realize how much you rely on experience when you bird until you go to a new area.  A person can study the book as much as they like but it's not a substitute for actually seeing the birds.  Any book is limited, the Costa Rica books are about a generation behind those dealing with the U.S.  Stiles and Skutch is laid out like the Peterson Guides of the 60's, all the birds crammed onto plates in the center section of the book with the descriptions and maps (?) in the remainder 90% of the pages.  Garrigues and Dean is laid out like the modern Peterson, with a few birds on each page and the map and description facing them.  The artwork is about comparable to the Western Peterson but there's frequently only one view of each bird.  Would you match the next photo with the plate? 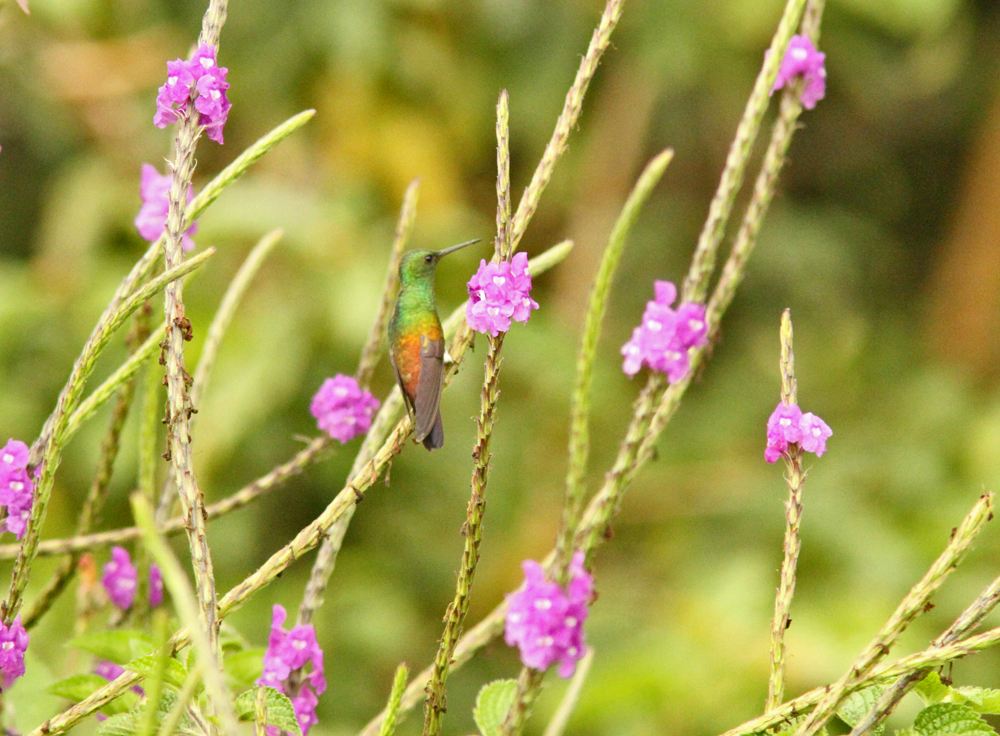 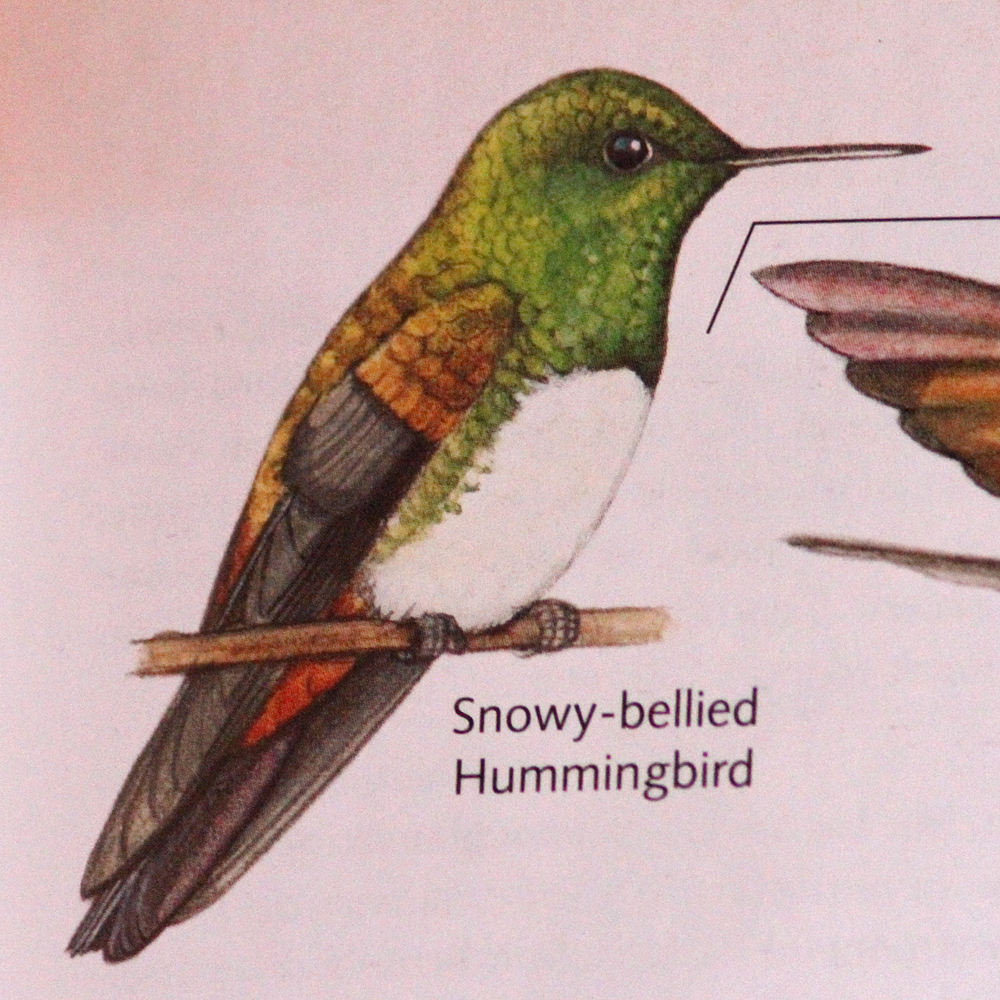 We stopped at a mid elevation patch of the little purple flowers so favored by hummers in CR hoping for white-tailed emerald.  We found our only Snowy-bellied's of the trip.  Most of us didn't realize how much like a rufous-tailed it can look like from the back.

We stopped for lunch at an open-air restarant and enjoyed some new birds for the trip, this was the only Golden-hooded Tanager I saw on the trip. 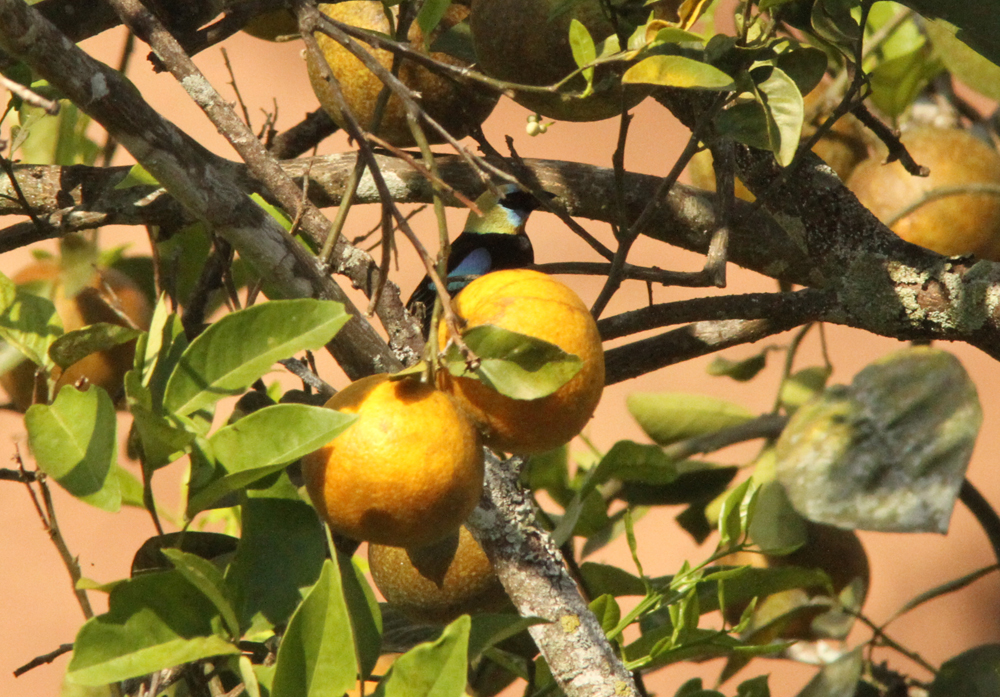 A Red-legged (as well as a Green) Honeycreeper appeared ... 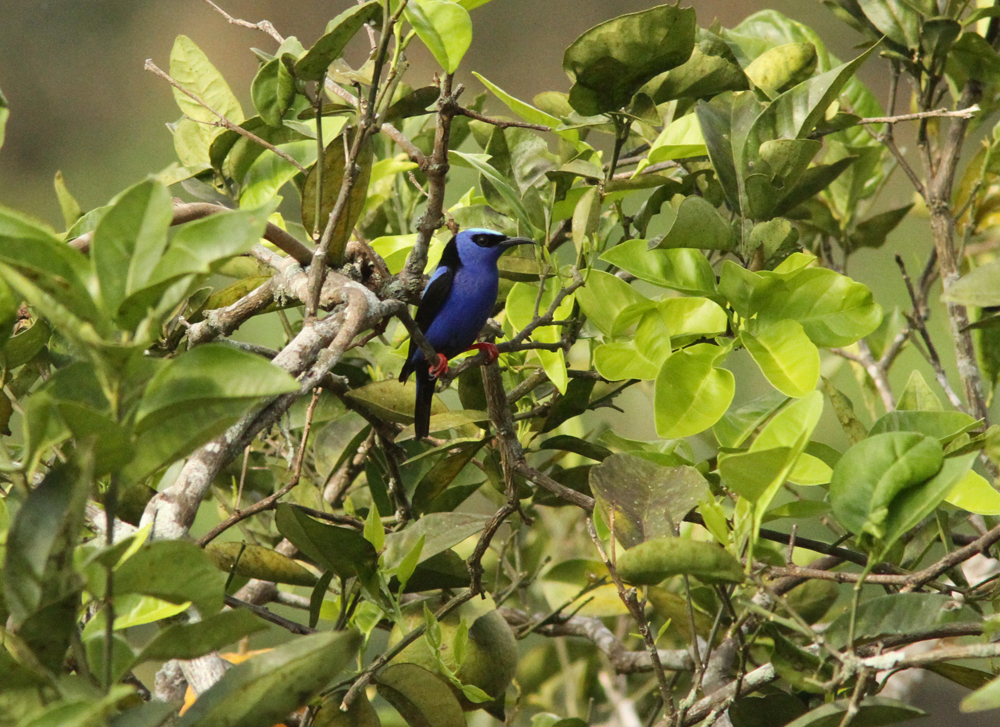 as did my first Red-crowned Woodpecker, a bird I had forgotten about.  I called it out as a Hoffman's (I admittedly didn't spend a ton of time with the woodpecker plates) 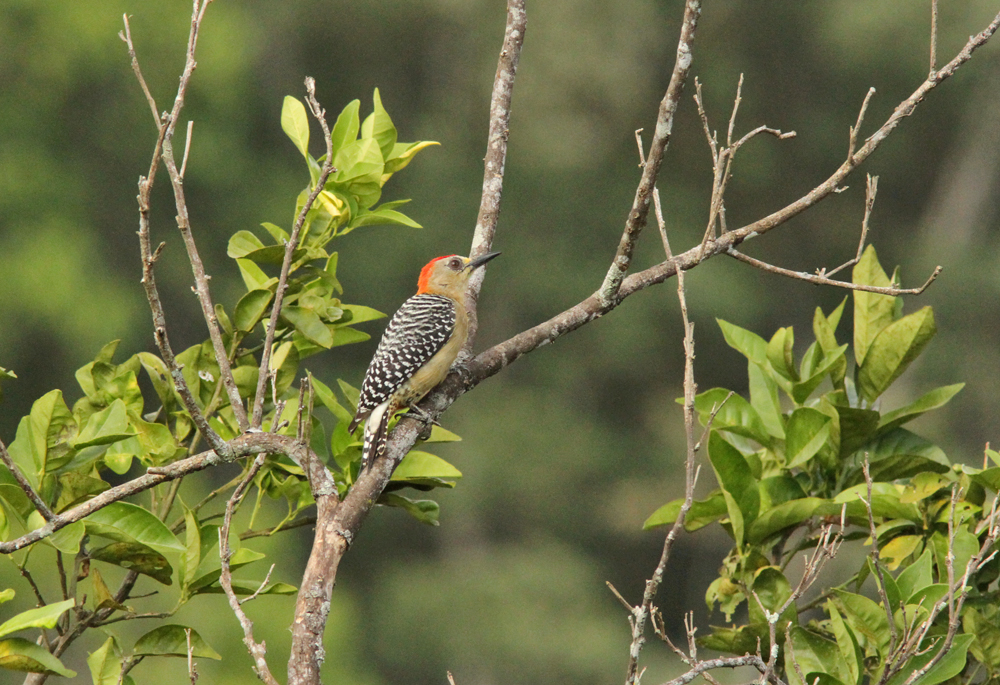 We mostly drove for our lodge in the Pacific rainforest, but Vernon did make another birding stop as we descended at some random field with Fork-tailed Flycatcher, Smooth-billed Ani, and a Red-breasted Blackbird, a bird I'd hoped to see, though not one we ever got closer to. 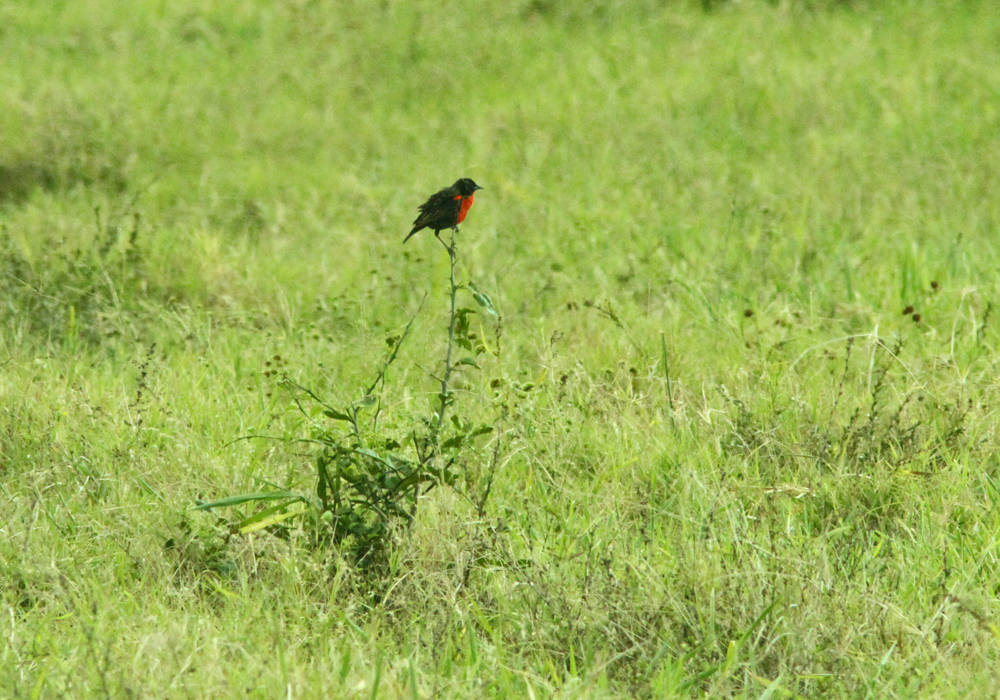 He taped out a couple Tropical Mockingbirds as well. 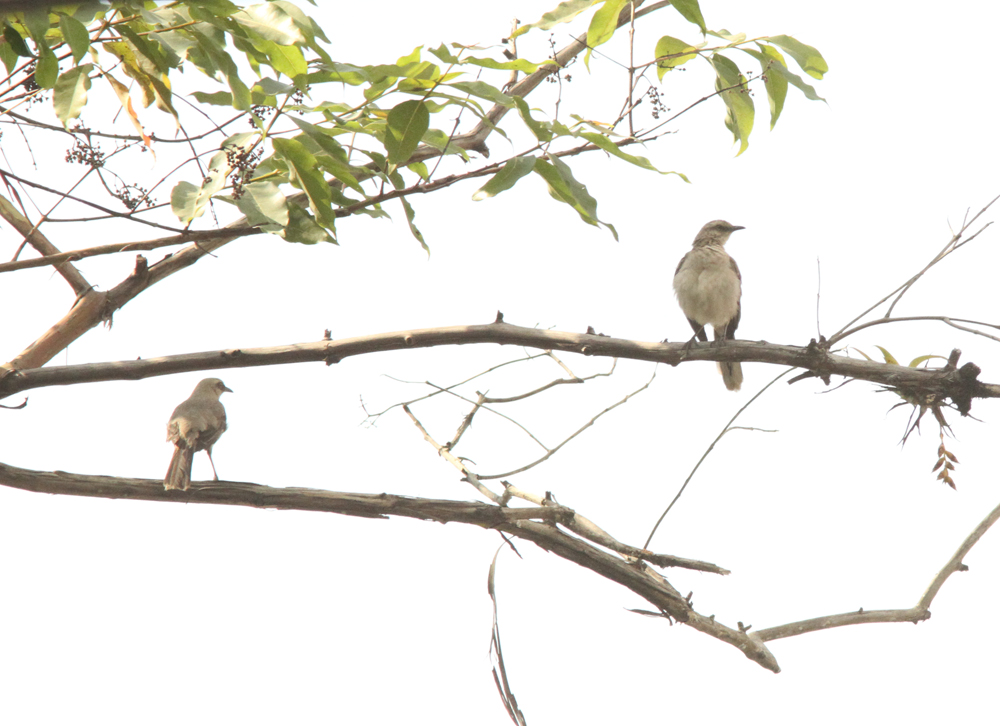 We continued descending.  I was using a 50mm lens to take scenery pics from the moving bus (it worked pretty well at 1/2000th of a second) and as I glanced up from shooting some black vultures in a roost tree I saw a silhouetted raptor with a pale sub-terminal line to the outer primaries.  There's only one raptor in the book with that pattern and I excitedly yelled out 'Crane Hawk!'.  I was in the very back of the bus and no one else got on it.  Vernon was skeptical, but there's literally nothing else in the book with that pattern.  It wasn't until I got home and down-loaded the photocard I had in the scenery camera that the riddle was answered.  I hadn't noticed that evening that, incredibly, I lucked into an image of the bird when I shot the vultures: 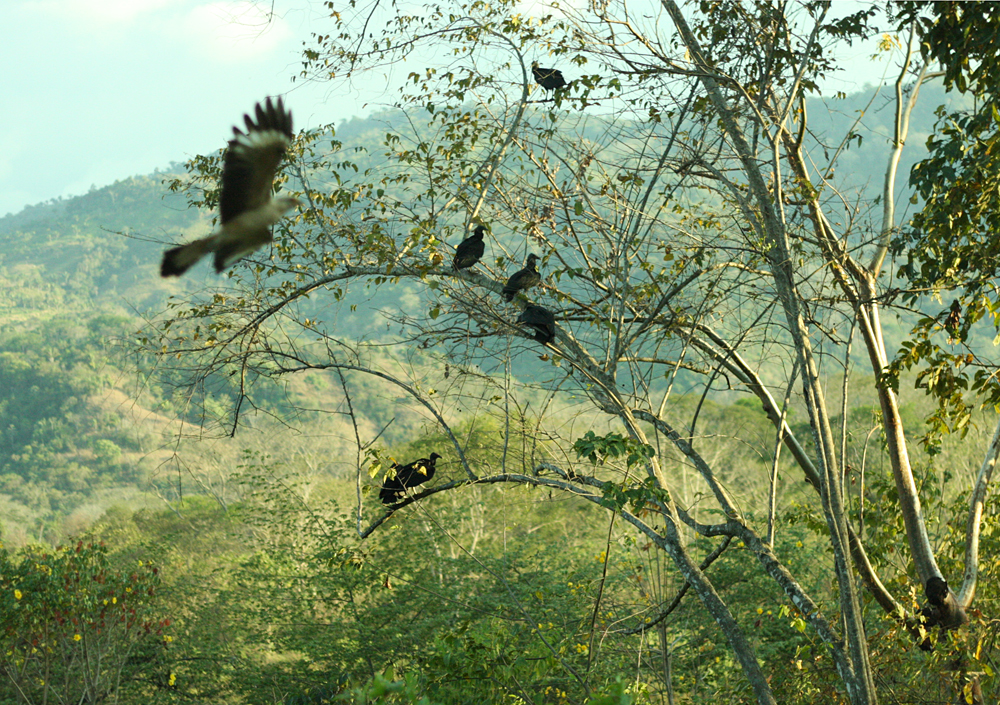 It's a Yellow-headed Caracara, a bird I'd never seen before.  Granted it has a light body, but backlit I'm sure it could look dark.  The book (Garrigues and Dean), which is the best book currently out there for CR imho, shows the wrong underwing pattern.  They duplicate the caracara upperwing primary patch on the underwing in the plate. 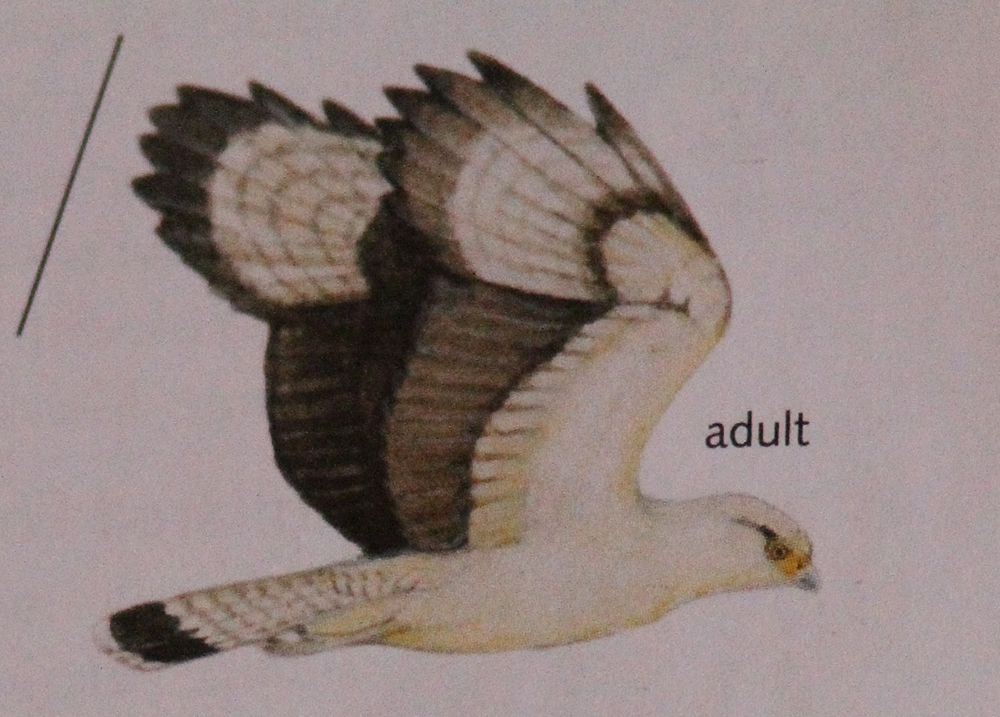 Oops.  Oh well.  The female Bellbird in Garrigues and Dean is also wrong, it doesn't show the big difference in the streaking of the throat vs the breast.  If I ever win the lottery I'm going back to Central America to do a Crossley style CR book.  Now everyone go buy lotto tickets to get those jackpots up to have-your-own-foundation-rich levels so I can start getting tickets again.
Posted by Matt at 5:38 PM