A swing and a miss

Success rates on chasing birds are always higher if you can go the day a bird is found. I was unable to locate the Trumpeter Swans that Tim found yesterday while I was at work in a decidedly half-hearted effort this morning.
Here's some file photos of Trumpeters from Washtenaw where they breed (bred?) in small numbers when I lived there. Those of traceable origin there had been released in Ohio (where they're not yet countable - more later) but are countable in Michigan since the re-introduction of birds (mainly in the UP) has been termed a "success". 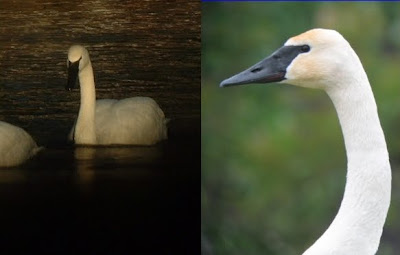 You can compare and contrast the pattern of the feathering of the side of the bill and the top of the bill between Trumpeter and Tundra between these two pics (it'd be better if my image program could flip images). As shown in Sibley, Trumpeter has pointed feathering extending down from the forehead but a relatively straight cheek. Tundra on the other hand has a relatively straight forehead but a noted bend to the cheek feathering giving a more vertical lower bill base... 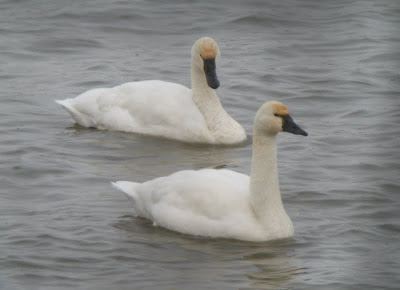 Notice though, that the pattern doesn't hold as well for young birds. The young tundra on the right has a pointed forehead... 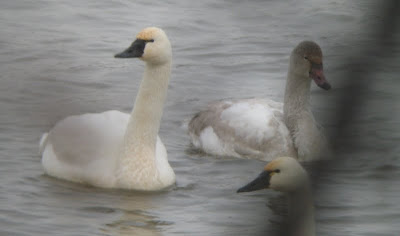 As far as birds to miss, I certainly could have missed a worse bird (though perhaps as the water contracts down I'll still find them). From a listing perspective, different state committees have had a lot of trouble deciding what to do with them. Adam Byrne summarized the Michigan perspective in the 2001 proceedings of the committee supporting its acceptance onto the Michigan list. The rationale makes sense (though applies to the UP population better than the ones I saw more frequently around Ann Arbor which I guess are more or less "grand-fathered" in since I don't think they would meet the ABA criteria reviewed by Adam by themselves). Who knows the origin of the birds on Paw Paw Lake. Adam does note a cluster of Southwest LP counties with breeding Trumpeters. I don't claim to know that much about the breeding birds of surrounding counties over here; the only pair I know of is one county north at Wolf Lake Fish Hatchery. I couldn't come up with the Breeding Bird Atlas II results on the web and don't own the first Atlas book. The Seney birds in the UP apparently stay up there in a river mouth that stays open in winter but I don't know what the other birds in SW Michigan do. I remember Trumpeters on the un-frozen Huron River in Ann Arbor in Michigan in February so I doubt they go far in general (though some birds banded from various midwestern programs have been seen/recovered along the Gulf coast in winter).
It seems that the historical evidence suggests that Trumpeters were present in Michigan "originally," which is generally accepted as the eastern limit to their breeding range; most feel that "re"-introductions east of Michigan are in fact introductions. I suppose in some respects there's not a lot of difference between counting a Trumpeter Swan versus a (fast-disappearing) Ring-necked Pheasant or (nearly extirpated (except for released?)) Bobwhite in Berrien whose current trajectories suggest that both will probably be gone here in 20 years barring further releases. Still, I hope Trumpeter Swan (or Monk Parakeet) isn't my 300th bird for Berrien, a number I'll probably hit by next summer.

In case there's anyone still reading who wants to read even more about Trumpeter Swans, the thread on the Bird Record Committee list on birdingonthe.net will provide a good jumping-off point...