Tim is The Man

"Hey honey? I think there's a birder on the phone." I hadn't heard the phone ring at all, completely asleep a few hours after getting home from a night shift. Ginger put the phone to my ear and I heard, "Dude, I've got a Nelson's Sharp-tailed Sparrow in New Buffalo Marsh." For the next 10 seconds I was trying to figure out who was even talking to me (as if anyone but Tim would find that bird there). Then the next 20 seconds I was trying to remember why "Nelson's sharp-tail" sounded familiar. Finally I shook the cobwebs off and realized the magnitude of the situation. I missed these birds last year when Tim found some for a first county record on a day I was working last fall. Tim and I had walked the New Buffalo Marsh (among other places) 2 years ago in the fall trying to kick these up without success, and now he'd found them again.

Unfortunately to get there you need a boat, and Tim's is the only canoe I have access to. I dithered for a bit and after talking again we decided it might be possible to reach the area on foot. Now I felt partially responsible for the birds being found given that 2 years ago I asked for hip waders for Christmas to make searching for this and other birds (i.e. LeConte's or Yellow Rail) easier. The hip waders were inaccessible in the back of the truck at the repair shop. I wondered if I could go Survivorman and tie my boots and binoculars in a garbage bag, attach them to my belt with the binocular strap, and elementary back-stroke my way down the river with the gear on my chest. While it seemed like a bad idea I stuck a couple garbage bags in my pocket on the way out the door just in case...

I drove down and did find a way to wade out through 400-800 yards of ankle t0 shin deep water and cattail marsh and met up with Tim in the higher area we'd walked 2 years ago. As Don Chalfant once told me, to look in grassy stuff next to cattail marsh, the bird was working in about an acre of knee- to thigh-high dense grass surrounded on 2 sides by cattail and on the northern side by the river. We followed it slowly as it would sometimes pop up and most of the time stay hidden. The bird was amazingly orangish to the naked eye and strikingly plumaged through optics: 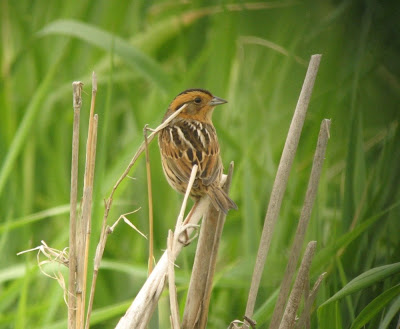 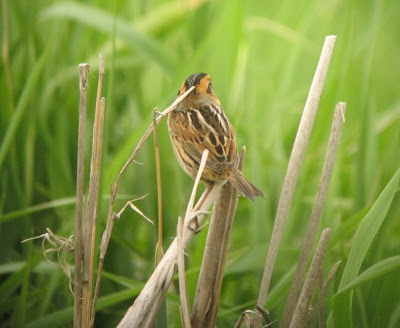 Tim mentioned something about noting the gray crown stripe for the committee and I absent-mindedly replied, "Oh yeah, these are write-up birds." He practically rolled his eyes saying, "yeah, because you see so many of these." Actually, that was first one I'd ever seen, though after the fish crow all non first-state records are just different flavors of dross. We had probably an hour or so of sporadic looks and mostly glimpses of the bird before we went in separate directions, Tim to his kayak and me to slog back through the marsh in the opposite direction. I considered checking 3 Oaks ponds on the way home since it'd be only a 20 minute detour or so, but since my mom had just arrived to visit and Ginger and I had tickets to listen to Dubya Bush speak at the Mendel Center I figured I'd best just head home.
I was literally 30 seconds from my driveway when the phone rings again. It was Tim. "You're going to hate me, but there's a white-faced ibis at Three Oaks." DOH!! Actually more correctly it would be Ginger who is going to hate him but again, who's counting. Ginger saw the look on my face when I hit the driveway. "NOW what??" "We-ell, honey, now there's a white-faced ibis at 3 Oaks." Now it was her turn to roll her eyes. "Make it quick," were her instructions. I blazed back down I-94, pushed it along US-12, and rolled up on Tim about 25 minutes later. I arrived just in time to see a Great Blue flush the bird. Fortunately it circled twice and landed again: 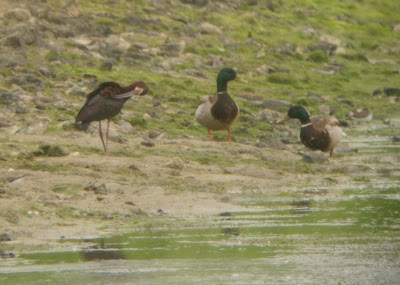 I blasted a quick burst of photos, checked the images to see that at least a couple were crisp enough for documentation purposes, glanced quickly at the turnstone and a white-rumped sandpiper in amongst the dunlin and semi sandpipers and blistered back for home. That would be 2 state birds (one a lifer) in my home county in one day (and both found by one Tim Baerwald, who else).
And for the record, I even had time to take a shower to wash the marsh grime off before we went to listen to former President Bush's remarks at the Economics Club.

Sounds like an awesome day...two great birds and then go hear Pres. Bush!