Well, 2 nights ago I finally started gaining some momentum back, adding 3 birds to the Bigby list, one more than I managed in all of June. I started off with nighthawks calling over St. Joseph on my way to Tiscornia. Unfortunately it was fully dark by the time I got there and I didn't have a chance at the avocets or godwits seen there. I headed south to Grand Mere SP where after some time I did eventually hear one of the whip-poor-wills that's been heard there after some concerted whistling every 5 minutes or so. 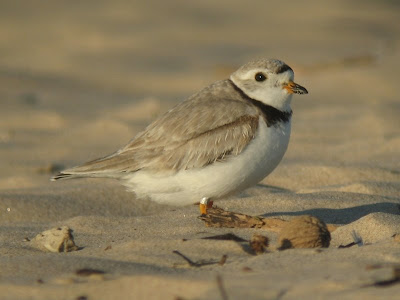 After lazing on the couch for a few hours, I headed back out to Tiscornia, getting there at sunrise. The big shorebirds appeared to be absent from Tiscornia or Silver Beach so I started walking north towards Jean Kloch beach and flushed a shorebird from within 15 feet of me. I could see it was a piping plover the second it popped up. It flew back down the beach and landed. Endangered in Michigan, it's one of a handful of regularly occurring Michigan birds I've never seen in the state. Once I'd spotted the sand-colored bird in the sand, it did give good looks, revealing a fairly worn adult sporting 5 bands (orange, green, black, and silver). I'd never noticed the orange eyering in the past.

Little blue heron is probably now the most common bird for the lower peninsula I still need for Michigan, another bird I've never chased in the past since I assumed I'll eventually just find one. Perhaps though I'd have been better driving after one when gas was $1.80 rather than waiting for a close one at $5... ah well.